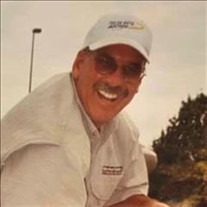 Michael J. Bohning, 65, car Sales Manager passed away on Friday, May 20th. . Born August 31, 1956 in Jefferson City, MO, the son of Herman "Jack" Bohning and Bernice K. Bohning. Mike's family moved to Tulsa in the early 60's, where his father bought a used car business, Brown Motor Company on E. 11th St. Mike attended Elliot Elementary, Edison Junior High and Edison High School. While in high school, Mike developed a solid work ethic by working part-time as a sacker at Petty's Fine Foods. He was a two-sport athlete at Edison playing baseball and basketball for Hall of Fame Coach J.V. Haney. Mike attended college after high school, but from his father, he had a love for the car sales business and that was a driving force in his lifelong career. In November 1988, a friend fixed him up with a girl named Betty Villareal Gettings. They had their first date at a bowling alley. Betty and Mike connected instantly and the romance was on. They married a few months later on February 14, 1989, a beautiful marriage full of unconditional love for 33 years. Mike thrived in the car sales working for Chris Nikel's, Classic Chevrolet and Keystone Chevrolet as Sales Manager. He won multiple sales awards and received rave reviews from customers who kept returning to Mike to buy cars over the years. And Mike had a love for fishing and hunting. He fished lakes all over Oklahoma and won a Bass Fishing Tournament at Grand Lake a few years ago and was awarded a new $40,000 boat. He hunted all over Oklahoma and the Central Plains States. He hunted for elk, pheasant, deer, turkey and dove and was a great chef on cooking and presenting his game. Mike was big outside his job in the community. He had a love for children and their development. At Keystone Chevrolet, he mentored Sand Springs elementary and junior high kids, teaching them the necessary skills in the sport of fishing. Mike loved pets. He always had dogs, many hunting dogs and agreed for his wife Betty to always have a cat and grew to love the cats too. Mike was loved and admired by everyone who met him. His coworkers in the car business and his customers all loved him. And Mike loved back. He loved his wife Betty and was always by her side. He was a great father to his daughter Melissa and a great grandfather to her children. He was a loving step-dad to his step-daughter Megan. His legacy will live on in his wife Betty, daughter Melissa, grandchildren and the many lives he touched. He is survived by his wife Betty, daughter Melissa Welch, sister Sharon McClelland, son-in-law Bobby Welch, granddaughter Sierra Welch, granddaughter Peyton Welch, grandson Zachary Welch, stepdaughter Megan Gettings Venable, step son-in-law Cody Venable, nephew Eric McClelland, and nephew Brett McClelland. Viewing will be 10AM-8PM, Tuesday, Mary 24, 2022 at Moore's Southlawn, 9350 E. 51st, Tulsa, OK. Memorial service will also be at Moore's Southlawn Chapel on Wednesday, May 25 at 2:00 pm. Moore's Southlawn 918-663-2233 share memories at www.moorefuneral.com

The family of Michael John Bohning created this Life Tributes page to make it easy to share your memories.

Send flowers to the Bohning family.