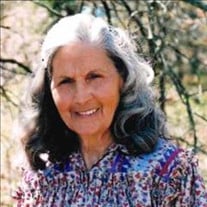 Natheda Mae Paddock (Taylor), 91, quietly slipped away at her Tulsa home, surrounded by family and friends. Theda was born on October 8, 1930, in Smithville, AR to Joe and Ettie Taylor. Theda spent her time as a young child on her family farm. After graduating from Sallisaw High school she moved to Tulsa, OK. There she found herself at a bus stop where she met lifelong partner, Gene Paddock, who caught her attention with his "hot rod" and never-ending persistence. They were married a few months later on July 13, 1950. Within the next year they welcomed their first son, Victor. Theda, being the clever saver she was, in 1951, jumpstarted her husband Gene's trucking company with her coffee tin savings that she had been looking forward to using for a good cause. Within the first few years of the new company Theda welcomed her first daughter, Kathie, in 1954. With Theda being known for her humor, only she could have a home split into 3 and moved across Tulsa to their preferred location. It caused quite the scene, leading to the first ever appearance of a pregnant Theda and family in the Tulsa World. Shortly after the arrival of the new house came the arrival of their last child, Donna, in 1957. That is where they lived when the family began attending Glenwood Baptist Church. It was at Glenwood that Theda met long time friend and cohort Reverend Robert Post. Theda was a dedicated member of the Glenwood Baptist Church, where she was most commonly found in the Sunday school, daycare, church camp, or kitchen. Theda was committed to her family above all else by volunteering thousands of hours as a booster member and also served as president of the organization for the Tulsa Speedway, where her husband and son raced cars each weekend. Theda held many jobs over her lifetime but made a career at Tulsa X-Ray where she met her partners-in-crime, Jan and Francis. Theda was known around the office for playing pranks on her co-workers and making sure everyone had a smile on their faces. After many fun years she retired upon the birth of first of her first grandchild, Saettie. Theda was known for being fiercely loving of her granddaughter and that love only increased when her second granddaughter Destinie was born, Easter of 1993. Theda relished the time that she had picking pecans in the backyard with her granddaughters so they could bake treats such as brownies, cheesecakes, and banana nut bread. Theda had never stopped her coffee tin tradition, and with a newfound purpose began saving for vacations with her granddaughters. Every summer after school let out Theda and Kathie would take the seats out of the van, lay down a comforter and throw in the girls to travel across the country. In her later life Theda became a great-grandmother to Phoenix and Cale, whom she loved with the same convictions. Theda was fond of passing down traditions to this new generation and sharing her never ending stories, knowledge, and hugs. Theda is preceded in death by her husband Gene Paddock, children Victor Paddock and Donna Paddock, siblings Thelma McCrackin, Bethel Dawson and husband Dan Dawson, Mildred Taylor, Edward Taylor and wife Vera Taylor, Bonnie Taylor, Henry Taylor, Gene Taylor, Vernon Taylor and Helen Headrick, nieces and nephews Kenneth Dawson, Linda Sue Dawson, Olen Taylor, Eric Taylor, and Randy Taylor, and best friend Francis. She is lovingly remembered by her brother Dewey, sister-in-law Mae Taylor, daughter Kathie Paddock, grand-daughters Saettie Paddock and Destinie Paddock, great-grandsons Phoenix Carney and Cale Conwell, best friends Pat Bale and Jan Knight, nephews and nieces Anne McDonald, Joyce Taylor, Bobby Cullison, Gary Taylor, Mike Taylor, Steve Taylor, Robert Taylor, Gina Taylor, Debbie Chase, Becky Taylor, Rodney Taylor, Greg Taylor, and Shelia Taylor. A Memorial Lunch will be held on Sunday, November 14, 1:00 to 3:00 p.m., at the Black Dog Fire Department, 5495 N 52nd W Avenue in Tulsa.

Natheda Mae Paddock (Taylor), 91, quietly slipped away at her Tulsa home, surrounded by family and friends. Theda was born on October 8, 1930, in Smithville, AR to Joe and Ettie Taylor. Theda spent her time as a young child on her family farm.... View Obituary & Service Information

The family of Natheda Mae Paddock created this Life Tributes page to make it easy to share your memories.

Natheda Mae Paddock (Taylor), 91, quietly slipped away at her...

Send flowers to the Paddock family.