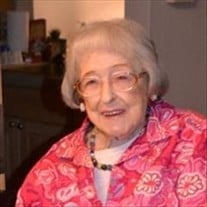 Neva Jean "Jeannie" (Warren) Purinton passed away on March 5, 2022. She was born on February 28, 1926, in Boynton, OK, to Oscar "Sandy" and Marjorie Warren. Neva was then raised in Tulsa, graduating from Tulsa Central High School in 1944. She worked at National Bank of Tulsa her senior year in high school and then after graduation. She enjoyed talking about the IBM machines she used and compared them to an early stage of computers. Later, she worked at ONG until she married Robert "Bob" Purinton on September 30, 1950. Having met on a blind date on Halloween night, 1949, Bob and Neva always considered that an anniversary, too. They had three children, Marjean, Bob, Jr. and Suzanne. Family meant everything to them. During the 1960s, they were active with a local square-dancing group, participating in numerous events and festivals. Neva was proud of her Oklahoma heritage, celebrating the Cherokee and Creek family history. Reading was also a favorite pastime, particularly historical fiction and mysteries; especially, those with strong female characters. She and Bob were members of the Memorial Drive United Methodist Church for many years, where she was involved with the women's circles. Neva was a resident of The Parke Assisted Living where she loved their kindness and the various activities in which she participated and appreciated. Previously, she lived at Aberdeen Heights Assisted Living. She is preceded in death by her husband, Bob, Sr. and son, Bob, Jr. Immediate family survivors include daughters Dr. Marjean Purinton of Lubbock, TX and Suzanne Bruce and son-in-law Ed of Fairfield, CA. She has one granddaughter, Elizabeth Purinton-Hall (Scott) Hall of Tulsa. A celebration of life will be held at a later date. Donations in her memory can be made to St. Patrick's Episcopal Church, Broken Arrow, OK, or Rivercross Hospice, Tulsa. Moore's Eastlawn 1908 S. Memorial Dr. Tulsa, OK 74112 918-622-1155

Neva Jean "Jeannie" (Warren) Purinton passed away on March 5, 2022. She was born on February 28, 1926, in Boynton, OK, to Oscar "Sandy" and Marjorie Warren. Neva was then raised in Tulsa, graduating from Tulsa Central High School in 1944.... View Obituary & Service Information

The family of Neva Jean Purinton created this Life Tributes page to make it easy to share your memories.

Send flowers to the Purinton family.