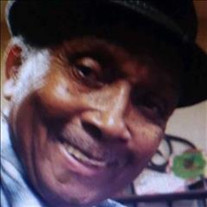 "So, when tomorrow starts without me don't think we're far apart. For every time you think of me I'm right there in your heart" Orie John Batiste's journey began on September 16, 1935. His father, Perry Batiste and his mother Lizzie Braxton. Orie grew up in Natchitoches, Louisiana living with his grandmother, Ruth and his grandfather. Orie worked in the field on their farm with his brother's Sam Batiste and Herman Batiste until the age of 15. The family then relocated to Los Angeles, California. There he attended Thomas Jefferson High School. He graduated. He married Shirley Faye Lindsey. he then relocated to Las Vegas, Nevada. There he joined the United States Army on February 1, 1954. He also served his country during the Korean War with an honorary discharge. When his term ended with an earned National Defense Medal in 1976 children, Me'chele Re'nee Batiste, Sabrina Ann Batiste, Orie relocated to Sea Side, California where he was stationed, Orie married Colleen Jones, children John Dana Batiste and Kimberly Ce'lest'e Batiste. Orie relocated back to Los Angeles, California where he resided. Orie was a hard worker, employed Los Angeles RTD Bus Company, Wow free bus passes every month, Lol thank you dad. Orie relocated to Tulsa, Oklahoma with his wife Mary Alice Walker-Batiste where he resided with children, Edward Crowel, Mary Elaine Batiste, Clifford Batiste and Reginald Batiste. Orie had very good work ethics, a hard worker in many areas. He didn't believe in calling in sick as a railroad engineer for Burlington Northern Railroad, where he worked until retiring. Orie loved being around family, friends, parks and barbecue, when in California Orie will do Disneyland with his grand kids, fishing, bowling, playing the piano and Las Vegas Casinos always laughing and smiling. A loving husband, father and Papa to his grand kids. Orie completed his journey October 19, 2021. Orie leaves t cherish his memory, his wife Mary Alice Walker-Batiste, Edward Crowel, Mary Elaine Batiste, Clifford Batiste, Reginald Batiste, Kimberly Ce'lest'e Batiste, son-in-law, Leonard of Seaside, California, John Dana Batiste, daughter-in-law Debra of Seaside, California, Sabrina Ann Batiste, son-in-law Wayne of Palm Springs, Me'chele Re'nee Batiste Outlaw, son-in-law, Otis of Long Beach, California. There are special twins niece, La Tina Batiste Bailey, husband, Norman of Rialto, California, twin nephew, Martine Batiste of Los Angeles, California, sad Martine completed his journey November 6th, 2021. Orie also leaves to cherish his memory, 17 grandchildren, 19 great grandchildren and a host of nieces, nephews and friends. On behalf of the family, we take those brief moments to say thank you for your kindness, thoughfulness and deed in time of need. The strength of friendship is really strong. May God bless each of you. I Do Not Go Alone If Death should beckon me with outstretched hand and whisper softly of "an unknown land" I shall not be afraid to go for the path, I do not know I take death's hand without a fear for he knows safely brought me here will also take me safely back and though in many things I lack he will not let me go alone into the "Valley That's Unknown" So I reach out and, take Death's hand and Journey to the "promised Land"

"So, when tomorrow starts without me don't think we're far apart. For every time you think of me I'm right there in your heart" Orie John Batiste's journey began on September 16, 1935. His father, Perry Batiste and his mother Lizzie Braxton.... View Obituary & Service Information

The family of Orie John Batiste created this Life Tributes page to make it easy to share your memories.

Send flowers to the Batiste family.