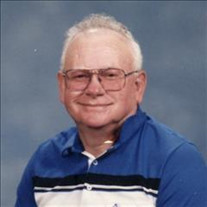 Paul Edwin Judd, age 91, longtime resident of Tulsa, OK passed away peacefully late Tuesday evening, January 18th, 2022. Paul was born on March 10, 1930 in Rover, Missouri to Henry William and Emma Louella (Lile) Judd. He was the youngest of 9 children. He married the love of his life, Freida Gregory, on January 12th, 1949 and was married to her for 69 years before her passing in 2018. Paul worked as a lumber yard foreman for over 30 years at Dale Carter Lumber until their bankruptcy and then worked at Economy Lumber until his retirement. After retirement he began working on small engine repair and also enjoyed going to estate sales with Freida. He was an avid fisherman in his younger years. In later years he enjoyed watching his two granddaughters play fast-pitch softball and basketball. He also loved to watch his Dallas Cowboys, OKC Thunder, and Classic Westerns. Paul was preceded in death by his wife, parents, four brothers - Harvey, Frank, Wayne, Harold - and four sisters - Laverna, Ann, Alice, and Lois. Paul is survived by his son and daughter-in-law Larry and Sharon as well as two granddaughters Brianne Normandin and her husband George of Alamogordo, New Mexico, Jodi Gise and her husband Jacob of McKinney, Texas, and four great grandchildren Georgie, Kate, Emma, and Austin. Paul is survived by his two sister-in-laws, Barbara Steele of Yakima, Washington and Carolyn Rotert of Jenks, Oklahoma, along with numerous nieces, nephews, cousins, other relatives and friends. He will be greatly missed but will continue to live within the hearts of those that he left behind. Viewing is 10am-8pm, Sunday, January 23, 2022 and the Funeral Service is 10 am, Monday, January 24, 2022 both at Moore's Southlawn Funeral Home. Moore's Southlawn 918-663-2233

The family of Paul E. Judd created this Life Tributes page to make it easy to share your memories.

Send flowers to the Judd family.