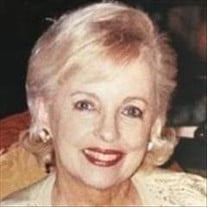 Paula Combest Unruh passed away on Wednesday, September 29, 2021, in Miami, Florida. She was 92 years old. She was a lifelong Oklahoman and pioneer for women in politics. Most importantly, she was a loving wife, mother, grandmother, and great-grandmother. Born in 1929, she was married to Robert James Unruh for 66-years until his death in 2017 and had three children, Jilda, James and Allison. While she raised the children, she was active in civic organizations including Tulsa Opera, America Red Cross, Chairman of the Tulsa Philharmonic's Cinderella Ball, and Co-Chair of the Tulsa Performing Arts Center Bond issue campaign. She was inducted into the Will Rogers High School Hall of Fame in 2013. Paula attended both the University of Tulsa and the University of Arkansas. In 1988, she was honored by her sorority with the Kappa Kappa Gamma Alumnae Achievement Award. It was at the University of Oklahoma, where her personal political papers, spanning 60-years, were donated by the family, and accepted by OU President David Boren. The collection is housed at the Carl Albert Congressional Research and Studies Center. Her political career began in 1958 when she successfully helped U.S. Rep. Page Belcher run for re-election. Their winning streak continued until his retirement in 1973. Between 1960 and 1988, she helped manage the state and national campaigns of Governor/Senator Henry Bellmon, Pres. Richard Nixon, Pres. Gerald Ford, Governor of Texas John Connally, and Pres. Ronald Reagan. In 1975, she was the first female chair elected to the Oklahoma Republican party. She received a Presidential appointment to the National USO Board from President Ford, and an appointment to the Department of Energy and the Department of Commerce by President Reagan. In 1980, she managed the Republican campaign in Arkansas that defeated Gov. Bill Clinton. Paula was preceded in death by her husband, Robert "Jim" and daughter, Jilda. She is survived by two children, James and Allison; sister, Claire Combest; granddaughter and her husband, Jennifer and Craig Reid; granddaughter, Jaclyn; two great-grandchildren, Paige and Greyson; sister-in-law and her husband, Carla and John Walton; three nephews, Jeff, David, and Paul; niece, Gail; and great nephews and nieces, Will, Sam, Ava and Cora. Service will be held at 1:00 pm, Saturday, October 9, 2021, at the Memorial Cemetery Chapel.

Paula Combest Unruh passed away on Wednesday, September 29, 2021, in Miami, Florida. She was 92 years old. She was a lifelong Oklahoman and pioneer for women in politics. Most importantly, she was a loving wife, mother, grandmother, and great-grandmother. Born... View Obituary & Service Information

The family of Paula Combest Unruh created this Life Tributes page to make it easy to share your memories.

Send flowers to the Unruh family.