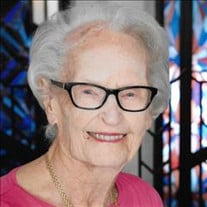 Pearl Hagle Rhoads passed away on August 20, 2021, two and a half months after she achieved her goal of reaching 100 years of age. Pearl Hagle was born at home in Cleveland, Oklahoma, on June 7, 1921, to Jim and Eva Hagle. She grew up near Blackburn, Oklahoma, on a farm with no running water or electricity but remembered her childhood fondly and had many stories from that time involving her brothers Ralph and Famus and her sisters Lorene and Nona. Once when Pearl was in the hayloft of the family's barn, she asked Ralph if it would hurt if she jumped down instead of using the ladder. Ralph indicated that it wouldn't, so she jumped-and of course, it did hurt. When she started to cry and demanded to know why her brother had said it wouldn't hurt, Ralph replied, "It wasn't the jump that hurt. It was the sudden stop." Pearl began attending a one-room school when she was 5 and quickly advanced through the grades, graduating at the age of 16. With the support of her family, she moved to Tulsa in 1937 to attend Tulsa Business College. It was there that her future husband, Thearon "Dusty" Rhoads, first noticed her. When they met again a few years later, it took Dusty a few tries before Pearl agreed to go out with him. When he proposed marriage, Pearl explained that her 16-year-old sister Nona had been living with her since the death of their mother, and Pearl felt she couldn't accept Dusty's proposal because of that financial responsibility. In Pearl's words, "Dusty looked at me with that grin of his and said, 'Don't you think it would be easier to take care of her with two paychecks instead of one?'." They were married on August 29, 1943, and spent the first years of their marriage living in a tiny apartment with a high school student sleeping on their sofa. In January 1947, Pearl and Dusty's first daughter, Linda, was born, and a second daughter, Janet, followed in December 1949. Pearl was the consummate homemaker and an accomplished seamstress, making all her daughters' clothes in addition to her own. She loved to be around other people and was active in many organizations, especially Boston Avenue United Methodist Church, which she attended faithfully for over 80 years. She and Dusty became ardent supporters of the University of Tulsa's basketball team and have a basketball scholarship named in their honor. In the 1970s, Pearl began a new career as a personal secretary, first to Charles B. Gannaway and then to former Tulsa mayor James Hewgley, an association that lasted 41 years. After 62 years of marriage, Dusty passed away in 2006. Pearl finally retired at the age of 90 following Mr. Hewgley's death in 2011. In 2012, Pearl moved to Oklahoma Methodist Manor. True to her personality, she seemed to know everyone there and was involved in most activities, and especially enjoyed the gym classes. A few months after moving in, Pearl was awarded "Gym Rat of the Month". She was ecstatic, although she did have to ask others what exactly a "gym rat" was. Pearl lived a long and happy life surrounded by family and friends who loved her. She will be deeply missed. Pearl is survived by her daughters and sons-in-law, Lynda and Rod Wright, and Janet and Kevin Hayes; 5 grandchildren and their spouses: Zach Wright (Rebekah McKinney), Andy Wright (Suze), Meredith Wright, Jeff Hayes (Katie Dilks), and Seth Hayes (Blair); 4 great-grandchildren: Walker and Emmett Wright, Tyler Santos, and Laylin Hayes; and many nieces and nephews. Pearl would also want to include 3 dear friends: Marvene Clark, Frances Baber, and Katie Cox. The family would like to thank Senior Helpers-especially Mary, Phyllis, Flo, and Chrystal-and Seasons Hospice for their loving care the last several months of Pearl's life. A memorial service will be held at a later date. Donations may be made to the Boston Avenue Methodist Church "Landscape Fund," the Thearon J. and Pearl H. Rhoads Scholarship at the University of Tulsa, or a charity of your choosing.

Pearl Hagle Rhoads passed away on August 20, 2021, two and a half months after she achieved her goal of reaching 100 years of age. Pearl Hagle was born at home in Cleveland, Oklahoma, on June 7, 1921, to Jim and Eva Hagle. She grew up near Blackburn,... View Obituary & Service Information

The family of Pearl H. Rhoads created this Life Tributes page to make it easy to share your memories.

Send flowers to the Rhoads family.