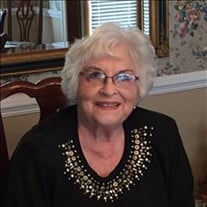 Peggy Ann Stonecipher November 24, 1935 - November 27, 2021 On November 24th, 1935, Peggy Jones was born in Seminole, OK. Her parents were James A. Jones and Lucy Wiley Jones. Peggy passed away peacefully on Saturday, November 27th, 2021 at her home in Richardson, Texas. She was raised in Fox, Oklahoma and graduated from Fox High School. She has remained connected to a number of her High School classmates in frequent reunions over the years. On September 17, 1953 she married Rupert Oral "Stonie" Stonecipher Jr. in Fox, OK. Upon her husband's U.S. Naval discharge in 1954, they lived in Ada, Oklahoma where Peggy worked for the Ada Chamber of Commerce. She followed her husband's career in the automotive industry that included moves to many locations. Her sons, Ross Allen and James "Kevin", were born in Wichita, Kansas in 1959 and 1960. Over the course of her life, she lived in Wichita, KS; San Angelo, Burkburnett, Abilene, Vernon, Henrietta and Dallas, Texas; as well as Roswell, NM and Tulsa, OK. She retired from Central & Southwest, the holding company for West TX Utilities, in 2002 in Tulsa, where she was a Benefits Specialist. Upon her husband's passing in 2015, she relocated to live with her son and daughter-in-law in Atlanta (Roswell), Georgia. She joined them in a move back to Dallas in 2018 and lived at Twin Rivers Senior Living in Richardson, Texas. She made many friends there, and participated in Bible studies, prayer group, and community activities. Peggy enjoyed the camaraderie, love and support of the residents and staff until the time of her death. Peggy made beautiful custom needlework and cross-stitch pieces. The family has lasting memories with individualized Christmas stockings and wall hangings she created. Peggy was also an excellent cook who left memories and recipes for the family and friends to enjoy for the future. She is survived by her sons, Ross Allen (wife Beverly) of Deep Gap, NC, and James Kevin of Tulsa; her grandchildren, Brett Stonecipher (wife Haley Gray) and Haley Brooke Stonecipher of Durham , NC and Caleb Riley Stonecipher of Tulsa, OK; and a very special nephew, Terry Propst, of Dallas, TX . Peggy gave her life to Christ at an early age. She attended and joined Baptist churches with her various moves, and participated in worship at Woodland Terrace and Twin Rivers communities. She was a dedicated women's auxiliary volunteer at St. Francis Hospital in Roswell, NM, a member of Beta Sigma Phi, and had a lovely voice. She sang in her high school and church choirs and sang at many weddings and funerals. She was a devoted wife, a loving mother and grandmother, and a loyal friend. She was preceded in death by her parents, three sisters (Val Late, Ruth Rutledge, Fannie Tucker), brother James (Jay) Jones and husband. The family especially wishes to thank Twin Rivers Senior Living.

The family of Peggy Ann Stonecipher created this Life Tributes page to make it easy to share your memories.

Send flowers to the Stonecipher family.