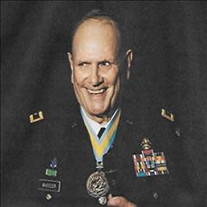 Peter Edward "Ed" Wheeler, left this life, his family and many friends behind on Tuesday, August 31, 2021. Despite having lived a life other men only dream about, at heart he was a soldier whose career took him from an Army Buck Private to... View Obituary & Service Information

The family of Peter Edward Wheeler created this Life Tributes page to make it easy to share your memories.

Peter Edward &quot;Ed&quot; Wheeler, left this life, his family and many...

Send flowers to the Wheeler family.