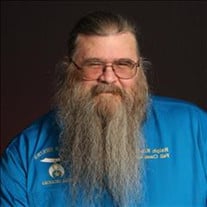 Ralph Reed Kreutzer, 68, passed away Friday February 11, 2022 at St Francis hospital in Tulsa, ok. He was born May 20, 1953 in Ft Worth, Texas, the son of Leo H. and Mary L. (Gasche) Kreutzer. Ralph enlisted in the army in 1972. He proudly served in the Old Guard in the nation's capital. He served in the army for 6 years. He later received his associates degree in electronic engineering, and proceeded to work as a biomedical technician. He was a 3rd degree Mason and a member of King Solomon Lodge #10 of Leavenworth, Kansas; Sapulpa Masonic Lodge #170, of Sapulpa, Oklahoma; Akdar Shrine of Tulsa, Oklahoma, and Widow's Sons MC. He is preceded in death by his parents, Leo and Mary Kreutzer. In 1972 he married the love of his life, Deborah Ann (Young) Kreutzer. She survives in the family home. Other survivors include his son Michael (Nicole), their sons Caleb and Hudson of Leavenworth, KS; his daughter Verna and her children Tristen, Nathaniel, and Gloria of Glenpool, Oklahoma, and 1 brother Jerry (Ann) Kreutzer, and a niece and nephew of Oregon. Visitation will be from 10 a.m. to 8 p.m. at Moore's Southlawn Chapel on 51st St in Tulsa, OK on Thursday February 17, 2022. Family will be present from 6 p.m. to 8 p.m. Graveside services will be held at 10 a.m., Friday February 18, 2022, at Ft Gibson National Cemetery, with service provided by Masonic Lodge and a military chaplain. In lieu of flowers, the family is requesting donations to the American Diabetes Association or a veteran's organization of your choice. Viewing is 10am-8pm and visitation with the family is 6pm-8pm on Thursday, February 17, 2022 at Moore's Southlawn Funeral Home. The graveside with military honors is 10am, Friday, February 18, 2022 at Fort Gibson National Cemetery. Moore's Southlawn 918-663-2233

The family of Ralph Reed Kreutzer created this Life Tributes page to make it easy to share your memories.

Send flowers to the Kreutzer family.