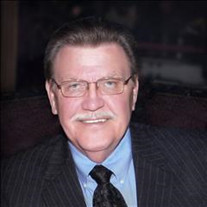 Randall Elwood Thomas, born September 22, 1949 in Tulsa, OK, passed away quietly on July 18, 2021 in Broken Arrow, OK surrounded by family. Randy graduated from Memorial High School in Tulsa in 1967. He then studied Industrial Management at Purdue University (BS 1971) where he was an active member of Theta Chi fraternity (and formidable ping pong player). During his subsequent career as a general contractor, largely at Jack Thomas Construction Company, Inc. and at Thomas & Associates Construction, Inc., Randy was recognized nationally for excellence in the metal building industry. He also served his profession nationally, including time as a board member for the Association of Builders and Contractors and as a board member and Vice President of the Systems Builders Association. He was active in the local business community as well, serving a term as President of the Tulsa Metal Building Dealers Association and participating in the Broken Arrow Rotary Club for many years. Randy loved to hunt and traveled widely to do so with trips as far as Zimbabwe and Alaska. He stayed deeply rooted in Tulsa, though, and hunted and fished extensively nearby. His children fondly remember spending time with him in the forests and wetlands of Oklahoma and at Oil Capital Gun Range. He was also long an active member and supporter of Ducks Unlimited where he served 10 years as the Broken Arrow chairperson and was twice recognized for distinguished service by the national organization. Randy is survived by his wife of 41 years, Melissa, of Broken Arrow, his son, Justin (Sandy) Thomas and grandson, Nolan, of Dallas, TX, his daughter Miranda (Jordan) Curzon and granddaughter, Nora, of Ames, IA, his daughter, Megan Thomas, and grandson, Cason, of Verdigris, his mother, Betty J. Thomas of Tulsa, his sister, Debra (Dave) Wagenblatt of Bixby, his brother-in-law, Major Meek of Tulsa, parents-in-law, Bill and Kathy Mefford of Madisonville, TX, sister-in-law, Sharon (Bill) Hill of Madisonville, TX, brother-in-law, Clifford (Barbara) Mefford of Tulsa, and many other extended family members. He was preceded in death by his sister, Mary Jean Meek. His father, Jack E. Thomas of Tulsa, passed away on August 5, 2021. A memorial service will be held on Monday, August 16th at 2:00 pm at Cornerstone Church, 3333 E. 41st St, Tulsa, OK. Moore Funeral Home - Southlawn Chapel 918-663-2233

The family of Randall E. Thomas created this Life Tributes page to make it easy to share your memories.