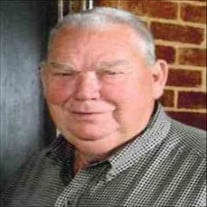 Richard Lonnie Barnett was born on February 5, 1945 in Broken Arrow, Oklahoma. Lonnie was the oldest and big brother to Gary, Dannie, Timmy, Terry, and Kim. He attended school in Broken Arrow and graduated in 1963. He was fascinated with fast cars and was known to drag race many streets in Broken Arrow. At a young age, he could name any make or model of any car made in the US. He married Mary Sue Hammons and had three wonderful sons Kevin, Jeff, and Johnny. Lonnie worked hard for his family as an aerospace structures mechanic for over 30 years and later retired from Spirit Aerosystems in 2011. In 1995 after being single for 3 years he met Sara Lynn Brown. He was instantly drawn to her on their first date with her suggestion of dinner at the Sonic drive-in and his favorite movie, Forrest Gump, at the dollar theatre. They were married December 28, 1997 and were together 23 years, 9 months, and 25 days. Sara had a daughter Erin and he finally had the girl he always wanted. He was able to witness the marriages of all of his children. Papa lived for his grandchildren. Anywhere the grandkids were, Papa was there. He took many trips to the zoo, Rooster Day parades, OU games, sleepovers, pool parties, cookouts, July 4th celebrations, Christmas gatherings, camping trips, cheerleading, volleyball, baseball, soccer games, school programs, and band recitals. Lonnie is preceded in death by his parents, Paul and Ethelean Sawyer, brothers Gary Barnett and Timmy Sawyer; uncles Gene, Kennith, Leon and Bob Barnett. He is survived by his wife Sara Barnett, of the home; his three sons; Kevin and his wife Kellie of Broken Arrow; Jeff and his wife Robin of Broken Arrow; Johnny and his wife Amy of Sand Springs; daughter Erin and her husband Gregg of Sapulpa. His 16 grandchildren, Jamie, Jessica, Paige Nicole, Paige Breanne, Ryan, Caitlin, Jonathan, Tyler, Kaylee, Andrew, Connor, Christopher, Ruthie, Judah, Naomi, and Shelby. His 7 great grandchildren, Bianca, Leah, Emilia, Jaden, Adelynn, Copelyn and Bear. As well as, his brother Dannie Sawyer and wife Teresa of Broken Arrow: Brother, Terry Sawyer of Broken Arrow; and sister, Kim Horton and her husband John of Edmond and numerous nieces and nephews. Viewing: 8:00 a.m. - 8:00 p.m., Tuesday, September 28, 2021 Moore's Eastlawn Chapel Family will receive friends and family, 6:00 p.m. - 8:00 p.m., Tuesday, September 28, 2021, Moore's Eastlawn Chapel Service: 1:00 p.m., Wednesday, September 29, 2021 Moore's Eastlawn Chapel, 1908 S. Memorial Drive, Tulsa, OK

Richard Lonnie Barnett was born on February 5, 1945 in Broken Arrow, Oklahoma. Lonnie was the oldest and big brother to Gary, Dannie, Timmy, Terry, and Kim. He attended school in Broken Arrow and graduated in 1963. He was fascinated with fast... View Obituary & Service Information

The family of Richard Lonnie Barnett created this Life Tributes page to make it easy to share your memories.

Richard Lonnie Barnett was born on February 5, 1945 in Broken...

Send flowers to the Barnett family.