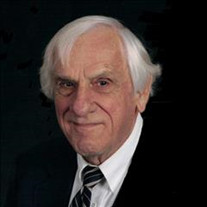 Richard (Dick) James Stanish, 90, passed away on Friday, May 13, 2022. Richard was born in Lansing, Michigan on November 22, 1931, to Polish immigrants. He graduated from Eastern High School (Lansing) in 1950 and from Michigan State University in 1954. He married Alice East in 1959 at the Michigan State University chapel. He later earned his MBA at Western Michigan University in 1967. He worked in marketing for several companies before becoming an Instructor at Tulsa Community College, teaching business and marketing for more than 20 years until retiring in 1993. He and Alice had a love of travel, visiting 65 countries in total. Dick volunteered at Gilcrease Museum, The Oklahoma Aquarium, and Meals on Wheels. He was a certified OSU Master Gardener and an avid sailor, as a member of Windycrest Sailing Club and Tulsa Power Squadron. Both he and Alice were active members of John Knox Presbyterian Church, where he served as a Deacon and Elder. He was also involved in local theater for many years. He loved being a grandfather, and made it to every school function, sporting event, and graduation, where he always served as the reliable photographer. Though he never had the opportunity to be a Boy Scout himself, he prided himself on helping his grandson (Grant) every year with his pinewood derby cars, which always took home the design award. Survivors include his wife of 62 years, Alice, and their dog, Searcy; daughters Julie Stanish of Chevy Chase, MD and Cindy (Cary) Marshall of Tulsa; grandchildren, Madeleine Marshall of New York, NY, Isabelle Marshall of Dallas, TX, and Grant Marshall of Ann Arbor, MI, as well as several nieces and nephews. He will be remembered as a loving husband, father, and grandfather, who prioritized family above all else. His grandchildren will especially miss having him as the surprise Santa, which was the highlight of every Christmas Eve. A memorial service will be held at 1:30 pm on Monday, May 23, 2022, at John Knox Presbyterian Church. In lieu of flowers, donations can be made to John Knox Presbyterian Church or Meals on Wheels of Metro Tulsa.

Richard (Dick) James Stanish, 90, passed away on Friday, May 13, 2022. Richard was born in Lansing, Michigan on November 22, 1931, to Polish immigrants. He graduated from Eastern High School (Lansing) in 1950 and from Michigan State University... View Obituary & Service Information

The family of Richard James Stanish created this Life Tributes page to make it easy to share your memories.

Send flowers to the Stanish family.