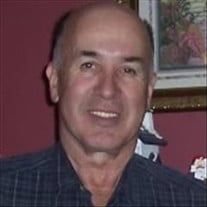 Rick Taylor, 75, of Tulsa, OK, went to be with his Lord and Savior on Wednesday, October 6, 2021. He passed peacefully, with his family by his side. Rick was born on Monday, February18, 1946, in Fairfax OK, to Richard Eugene Taylor and Wanda Pauline (Henry) Taylor. He graduated from Bristow High School and was proud to have served as a Fireman Apprentice in the United States Navy in San Diego where he became ill and was assigned to Balboa Naval Hospital until his medical discharge in 1963. He remained in California and worked for a time and then relocated to Dallas, Texas. From there, he returned home to Bristow, where his mother resided. Rick gave his life to his Lord and Savior in Bristow under an oak tree before his grandfather's funeral, and was baptized at VCC in that same year, and he has been serving Him ever since. Rick met the love of his life, Joan (Goad) Vance Taylor, at Victory Christian Center where they were married in Tulsa, OK, on April 30, 1983. He was a hard worker, and spent his 22 year career as a Logistics Truck Driver with a record of zero accidents or late loads. Rick had a kind, gentle, giving spirit. He valued friendships and relationships. He was a loving father, who always took great pride in his daughter, he gave unconditional love and encouragement, and never hesitated to tell her how proud he was of her and how much he loved her. His faith and love of God were the center of his life, and he leaves behind a legacy of love, for both his family and his Savior. He had a steadfast Christian faith in God, that never wavered under any circumstance, and it sustained him throughout his life. Rick was a devoted member of Victory Christian Center, Tulsa, OK, where he was active as a Greeter and enjoyed attending various church activities. He also traveled with a team who ministered Dr. Edwin Louis Cole's Maximized Manhood to men in Tulsa and adjoining states. Rick was also a prayer warrior, and read his Bible daily. He would most want to be remembered for showing and telling others the way to Christ. He loved the Lord with all his heart and soul, and was a role model to his family and others as he walked out his Christian life. No matter what he was doing, he did it all, as unto the Lord. As a person who lived his faith daily, he believed in helping wherever and whenever he was needed. He was always willing to lend a helping hand, whether it be to his family, church family, friends, coworkers, or strangers that he just met. Rick was known for his countless acts of generosity and kindness, many of which we will never know, and he leaves behind a legacy of caring that affected many people and made their lives better. He was a kind, patient man, had a real listening ear, and he excelled at being a role model and mentor to others. He believed being positive was a choice, and lived a life full of gratitude, never missing an opportunity to say "thank you" for even the smallest act of kindness. His example was an inspiration to all who knew him, and he was an encourager, who always chose to see the best in people. You would never hear him say a negative word about anyone. He believed in forgiveness, and showing mercy and grace to everyone. Rick was preceded in death by his parents. He is survived by his wife of 38 years, Joan (Goad) Vance Taylor; daughter, Rebekah Sharon Taylor of Tulsa, OK; brothers Chuck Taylor and wife, Sarah, of San Antonio, TX, Mike Taylor and wife, Jeanette, of Okmulgee, OK, and Mark Taylor and wife, Nancy, of Catoosa, OK; sister, Wendy Taylor of Jenks, OK; half-sister, Pam Taylor-Weaver of Oregon; half-brother, Doug Taylor of California, as well as many nieces and nephews; and a lifetime of friends. Rick will be greatly missed in the days ahead, and although he was taken from us way too soon, his spirit and memories will live on within each of us, because we were privileged to have him in our lives. There is no doubt that Rick will be rewarded to hear, "Well done, good and faithful servant." And, we who are saved and know the Lord, have joy in our hearts, resting in the assurance we will be with him again, in Heaven, one day soon. What a day, glorious day that will be! Viewing 8 a.m. - 8 p.m., Monday, October 18, 2021 Moore's Eastlawn Chapel, 1908 S. Memorial Dr., Tulsa, OK Graveside Service 12:30 p.m., Tuesday, October 19, 2021 Fort Gibson National Cemetery, Fort Gibson, OK Moore's Eastlawn Chapel, 918-622-1155

Rick Taylor, 75, of Tulsa, OK, went to be with his Lord and Savior on Wednesday, October 6, 2021. He passed peacefully, with his family by his side. Rick was born on Monday, February18, 1946, in Fairfax OK, to Richard Eugene Taylor and Wanda... View Obituary & Service Information

The family of Rick Taylor created this Life Tributes page to make it easy to share your memories.

Send flowers to the Taylor family.