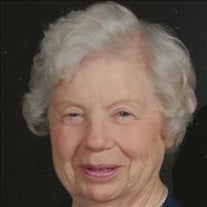 Roberda Velda (Waller) Duncan was born on February 26, 1934, and passed away on January 6, 2022, after a brief illness at the age of 87. Born in Blue Jacket, Oklahoma, Velda resided in Miami, Oklahoma as an adult before settling in Tulsa, Oklahoma to raise her three children. She met her future husband, James Duncan, while square dancing and they were married for 40 years. Velda was preceded in death by her parents, Roy and Ruth Waller, her brother, Ralph Waller, her daughter Joyce (Blair) Moon, son in-law Steve Moon, and son Allen Blair. She is survived by her husband, James Duncan, her daughter and son-in-law, Janet (Blair) Knoernschild and Tye Knoernschild, her husband's children Karen (Duncan) Schooley and Dave Schooley and David Duncan and Terri (Bankhead) Duncan, her sister Ester (Waller) Huxell and daughter in-law Cindy (McKinley) Blair. She is also survived by 10 grandchildren and 13 great-grandchildren. Velda worked in insurance for most of her working life and then in her retirement, worked in the nursery at Christ United Methodist Church, where she was honorary Grandma to many babies. She attended Asbury United Methodist Church for many years and was (according to her Grandchildren) the world's best birthday cake maker, she loved to square dance and even involved her children and grandchildren on many occasions. Velda was a talented seamstress, even making her own square dance dresses - her Grandchildren loved to assist, which typically resulting in them playing with her tomato pin cushion. Velda was the center of our family with many holidays and birthdays revolving around her cooking, some fan favorites were her iced tea, broccoli and cheese, spaghetti and cheesy potatoes. She hosted many slumber parties with her Grandchildren, where they played dress up with in her petticoats, ate junk food and watched Disney movies. She always made every addition to the family feel welcome. She will be greatly missed. A viewing will be held at Moore Funeral Home on Tuesday, January 11, 2022, from 1 to 5 PM and the funeral at 2 PM on Wednesday, January 12, 2022, with graveside service following at Memorial Park Cemetery.

Roberda Velda (Waller) Duncan was born on February 26, 1934, and passed away on January 6, 2022, after a brief illness at the age of 87. Born in Blue Jacket, Oklahoma, Velda resided in Miami, Oklahoma as an adult before settling in Tulsa, Oklahoma... View Obituary & Service Information

The family of Roberda Velda Duncan created this Life Tributes page to make it easy to share your memories.

Send flowers to the Duncan family.