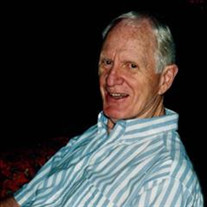 Robert "Bob" Earl Kirberger, Jr., was born in Tulsa, Oklahoma, on October 26, 1925, to Robert Earl Kirberger and Margaret Jordan Kirberger. He passed from this life on January 30, 2022. A life-long Tulsan, Bob graduated from Will Rogers High School in 1944, alongside his brother Bill. Following graduation, he immediately joined the Navy, in which he served during World War II. After returning from service, he attended the University of Tulsa, from which he graduated in 1951, along with his brothers, Bill and Don. He then worked as a coach and teacher for many years. Upon retirement from the Tulsa Public Schools, he continued his business of refurbishing, inspecting, and selling homes. His passions were sports, animals of all kinds and buying and selling cars. During childhood summers, he worked the fields so he could ride horses and play polo. In high school, he lettered in basketball, football, rifle, and track. He played on the basketball, track, and baseball teams in college. He also boxed while in the service, played a good amount of golf, and in later years became a master bowler. Throughout his life, he loved to keep in shape. Far beyond his 90th birthday, he continued daily exercise on his treadmill and bicycle, with a few kettlebell swings and calisthenics thrown in for good measure. His devotion to his pets was legendary. Most of these were dogs and cats. But he also cared for a good number of horses, goats, snakes, and birds. He also had a baby alligator, a Shetland pony, families of quail and rabbits, and a skunk named Flower. Bob is preceded in death by his wife of 62 years, Phyllis Rollins Kirberger; his parents; sister Margaret Ann Nelson; brother William Jordan Kirberger; sisters-in-law JayDean Grubb, Clevanne Kirberger and Jody Kirberger; brothers-in-law Bill Grubb and Fred Nelson; nephew William Jordan Kirberger, Jr., and niece Margaret Ann Kirberger. He is survived by his brother, Donald Charles Kirberger; children Kristi Binney (Charles), Bob Kirberger III, Brad Kirberger, and Elizabeth Kirberger (Mojgan Hakimian); grandsons Ryan, Elliott and Jonathan Binney, Ben Kirberger and Brad Kirberger, Jr., and granddaughter Alicia Mader; along with many nieces, nephews, and great-grandchildren. In lieu of flowers, donations may be made to the Humane Society of the United States. Service is Pending. Moore's Southlawn 918-663-2233

Robert "Bob" Earl Kirberger, Jr., was born in Tulsa, Oklahoma, on October 26, 1925, to Robert Earl Kirberger and Margaret Jordan Kirberger. He passed from this life on January 30, 2022. A life-long Tulsan, Bob graduated from Will Rogers High... View Obituary & Service Information

The family of Robert Earl Kirberger, Jr. created this Life Tributes page to make it easy to share your memories.

Send flowers to the Kirberger family.