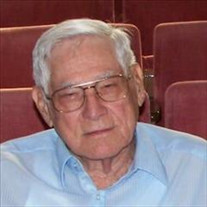 Robert James "Bob" Purinton passed away on March 2, 2012, from complex complications of his heart, lungs and kidneys, He was 91 years old. He was born on August 4, 1920, in Tulsa, to Arthur James and Clara Purinton. The family later moved to Kansas. He graduated from Shawnee Mission High School in 1938, where he lettered in several sports. He began college at Kansas State University and then enlisted in the Navy. He served in the Pacific Theater of WWII as an engine mechanic for sea planes. Often seen around town wearing his WWII Navy Veteran's hat, Bob was very proud of his service time. After moving back to Tulsa, Bob met his future wife, Neva Jean Warren, on a blind date on Halloween night. They married on September 30, 1950. They had three children, Marjean, Bob, Jr. and Suzanne. In 2011, Bob and Neva celebrated their 61st wedding anniversary. Bob, Sr. worked for TWA and later became an airline mechanic for American Airlines, staying there for 35 years and retiring in 1983. He was an avid crossword puzzle lover as well as enjoyed woodworking and gardening. After retirement, Bob and Neva enjoyed traveling, touring around the United States as well as Europe. He took pleasure in sharing the detailed photo albums he made of each trip. He and Neva were also members of the Memorial Drive United Methodist Church. Bob served as an usher arid was always happy to take the church newsletter to the post office each week for mailing. Bob had a strong will and was an amazing example of survival. He is preceded in death by his son, Bob, Jr. Immediate family survivors include his wife, Neva, daughters Dr. Marjean Purinton of Lubbock, TX and Suzanne Bruce and son-in-law Ed of Fairfield, CA. Others include daughter-in-law Janet Purinton, and granddaughter Elizabeth Hall (Scott), both of Tulsa. The funeral service will be held on Friday, March 9, at 10:00 a.m.at Memorial Drive United Methodist Church. Graveside burial will be private. Under the direction of Moore's Eastlawn Chapel 918-622-1155 This obituary was published in the Tulsa World on 3/7/2012.

Robert James "Bob" Purinton passed away on March 2, 2012, from complex complications of his heart, lungs and kidneys, He was 91 years old. He was born on August 4, 1920, in Tulsa, to Arthur James and Clara Purinton. The family later moved to... View Obituary & Service Information

The family of Robert James Purinton created this Life Tributes page to make it easy to share your memories.

Send flowers to the Purinton family.