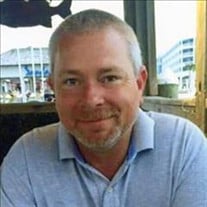 Robert "Bobby" Lee Shook, 54, of Tulsa, passed away February 8, 2022 surrounded by family after his courageous fight against cancer. Bobby was born August 18th, 1967 in Tulsa to Robert and Glennal Shook. He is survived by his wife Sandie Shook, children Robert and Ashley Shook, Bridget and Blake Fogle, Shelby and Dalton Gentle and Mackenzie Marrs. He is also survived by his parents Robert and Glennal Shook and sister Patricia and Ike Wilkerson, his grandchildren Morgan, McKinley, McKaylee, Maverick, baby brother Behr, and Marley. Bobby was strong willed, hard working and stoic. He had a true passion for restoring classic cars and trucks, which he learned not only from his dad but from his own two hands. He also enjoyed weekends fishing, working at All-American Forklift with the guys and watching car shows. Although he loved all things cars, his dogs and being a PawPaw were truly two of his greatest joys. His other greatest joy was his wife, Sandie. They were introduced by their mutual best friends and were married in Eureka Springs a year after they began dating. Bobby found his love for the beach during their travels to Turks & Caicos and the Bahamas. He also loved their weekends at the lake and spending time together at their home working on his many projects. When Bobby met Sandie, he certainly brought down his walls and it was clear to see they were soulmates. Viewing will be 10 AM - 8 PM, Friday, February 11, 2022 at Moore's Southlawn, 9350 E. 51st, Tulsa, OK with the family receiving friends 5 - 7 PM. Funeral Service will be 10:00 A.M., Saturday, February 12, 2022 at Memorial Park Cemetery Chapel, 5111 S. Memorial Drive, Tulsa, OK. Moore's Southlawn 918-663-2233

Robert "Bobby" Lee Shook, 54, of Tulsa, passed away February 8, 2022 surrounded by family after his courageous fight against cancer. Bobby was born August 18th, 1967 in Tulsa to Robert and Glennal Shook. He is survived by his wife Sandie Shook,... View Obituary & Service Information

The family of Robert "Bobby" Shook created this Life Tributes page to make it easy to share your memories.

Send flowers to the Shook family.