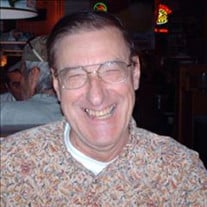 Robert Alan Suarez, faithful husband, loving father, and grandfather, 87, passed away on Good Friday, 15 April, 2022. Robert was born 22 February, 1935 in New York, New York. He served three years in the Army, serving along the German boarder. Robert obtained a B.A. in Cinematography from Bob Jones University. He moved to Tulsa to edit productions for a local ministry. Robert later returned to the printing trade for which he trained at Baltimore Press. Robert was a faithful churchman serving as an Elder, and whatever else needed done, at Tulsa Bible Church. He went on to be a long time church member at Sequoya Hills Baptist Church where he served as a Sunday school teacher in the youth, children's department. Robert was a genius with a pair of pliers fixing cars, print shop equipment, and pulling teeth. The necessity for growing a garden in lean times resulted in his son's love and obsession with plants. He and his wife Earllyn enjoyed traveling, mostly to warm and sunny places in the Caribbean. He loved reading, watching documentaries like American Greed, and discussing geopolitics. Robert was preceded in death by his wife of 56 years, Earllyn Thomas, in 2016 and his sister, Olivia Alberti. Robert is survived by his sisters, Joni Alberti Schock and Patti Alberti Phillips; his daughter, Laura Suarez Grassi and her husband Keith Grassi, and two granddaughters, Olivia and Bethany Grassi; his son, Ron Suarez and his wife, Tonya Gilliam Suarez, and his granddaughter, Sophie Suarez. Private Family Service. Moore's Eastlawn Chapel, 918-622-1155

The family of Robert Alan Suarez created this Life Tributes page to make it easy to share your memories.

Send flowers to the Suarez family.