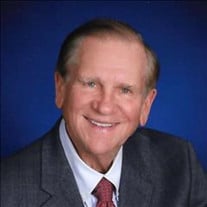 Robert David Lundgren June 12, 1932 - April 22, 2022 Robert David Lundgren (Bob) of Tulsa, Oklahoma, passed away peacefully on Friday, April 22, 2022, at the age of 89. Bob was born on June 12, 1932, in Kansas City, Missouri, to Edward B. and Annie Linnea (Matson) Lundgren. In 1936 the family moved to Overland Park, Kansas. Bob attended Shawnee Mission High School graduating in 1950 as the senior class co-valedictorian. He was President of the Hi-Y club, a member of the National Honor Society, and a member of the "Torch and Scroll" Scholastic Honor Society. After school and on the weekends, Bob worked driving a grocery truck for Goodell's, a local grocery store that delivered food orders to homes. Bob went on to attend Kansas City University, a private school, now called the University of Missouri-Kansas City. He graduated with his bachelor's degree majoring in accounting in 1954. Bob met the love of his life, Betty Spradlin, on the steps of the Broadway Baptist Church in Kansas City and they were married in 1954. While working on his master's at KCU, Bob was recruited by Arthur Young in Kansas City, Missouri. Bob joined Arthur Young in 1955, transferred to Tulsa, Oklahoma, in 1961, and retired in 1992 as a partner with Ernst and Young after a 37-year career in Auditing. He enjoyed his work with several principal clients including Walmart, The Williams Companies, and Quik Trip. Bob served on numerous committees and held many leadership positions in several organizations. He served as President of the Oklahoma Society of Certified Public Accountants and as a Board Member of the Oklahoma Accountancy Board. He was honored to receive "The 1990 Public Service Award" from The American Institute of Certified Public Accountants given to "outstanding individuals who have consistently volunteered their professional and personal time to improve the quality of life in their communities. Through selfless actions, they truly embody the qualities of integrity and commitment inherent to the profession of accountancy". After Bob retired, the Oklahoma Society of Certified Public Accountants inducted him into the "Past Accounting Hall of Fame" in 2001. Bob was a member of the Petroleum Club (past president), Cedar Ridge Country Club, and The Coves Golf Club. After retirement, Bob continued as a Board of Directors Member for the Tulsa Men's Club serving as Secretary for 17 of the 20 years until passing the baton in 2019. Bob enjoyed attending the Tulsa Downtown Rotary for many years. Bob was a member of Boston Avenue United Methodist Church for over 40 years, served on the Finance Committee, and was a member of the Round Table Sunday School Class. For 32 years, Bob and Betty owned a bed and breakfast called the Clayton Country Inn. It was located near Sardis Lake and the Talimena Scenic Drive in the heart of the Kiamichi Mountains in southeastern Oklahoma. They had many adventures at the Inn which had a restaurant, guest rooms, and guest cottages. The Kiamichi Mountains were a great attraction for guests who liked to ride horses and 4-wheelers. Bob was a loving husband, father, and Papa. Together with his children, grandchildren, and great-grandchildren, Bob and Betty especially loved spending weekends and holidays boating, fishing, and golfing on Grand Lake at The Coves. Bob was preceded in death by his parents, his sister, and his brother. He is survived by his wife, Betty, and their two daughters: Nancy (Glenn) Harrison and Terri (Dr. Dean O.) Todd. He is also survived by four grandchildren: Stephen Harrison, Jessica Harrison, Tyler (Tracy) Todd and Carter (Adrianna) Todd. He also has two great-grandchildren: William Todd and Molly Todd. In lieu of flowers, donations would be appreciated in honor of Robert Lundgren to Sistema Tulsa, St. Jude, or the charity of your choice. Visitation will be held from 5PM-7PM Monday April 25, 2022 at Moore Southlawn Chapel with Private Family Services at a later date.

The family of Robert D. Lundgren created this Life Tributes page to make it easy to share your memories.

Send flowers to the Lundgren family.