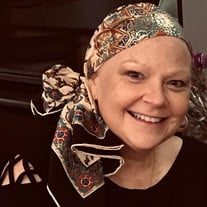 Robin Lynn was born on January 19, 1961 at Hillcrest Hospital in Tulsa, Oklahoma. She was brought home to a loving family by Dale and Loretta Crittenden, who had been trying unsuccessfully to start a family for several years. Ten months (and... View Obituary & Service Information

The family of Robin Lynn Baron created this Life Tributes page to make it easy to share your memories.

Send flowers to the Baron family.