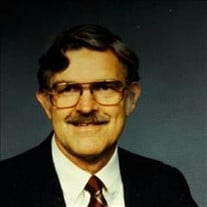 Roderick Whitbeck Tillman, born February 24, 1934, lost a two-year battle with Leukemia on Thursday, January 21, 2016. During this time, he was a participant in clinical trials at MD Anderson in Houston Texas. He was born in Macomb, Ill., to Arthur and Florence (Whitbeck) Tillman. Rod graduated from high school as Valedictorian in 1952. He was active in sports and excelled in basketball. He played trumpet in the band and sang in the chorus. He attained a Bachelor of Science degree in geology from the University of Wisconsin in 1957. He served in the United States Navy prior to returning to Madison, Wisconsin where he received his Masters of Science degree in geology in 1960. Prior to furthering his education, Rod worked for Conoco in a training program where he learned the workings of the oil industry. Rod earned his PhD from the University of Colorado, Boulder in 1967. After completing his PhD he moved to Tulsa where he worked in the research lab at Sinclair Oil. He later joined the Cities Service Research Lab until 1985. He opened his own consulting business and worked in various aspects of the field of sedimentology and continued teaching in various short courses and field courses around the country. His work in the oil industry was focused in the Rocky Mountains. He considered his most important contribution to be the study and development of the Hartzog Draw Field, in Wyoming. He was extensively published, taught seminars all over the world and led many field trips associated with geology. He was very active in organizations serving as president of the Tulsa Geology Society in 1975-76, president of the Society for Sedimentary Geology (SEPM) in 1990-91, he was recognized as "Outstanding Technical Editor" by the Society of Petroleum Engineers and was a Fellow of the Geological Society of America. He was one of the founders of the Tulsa Geology Society Foundation which provides scholarships for geology students and assistance and resources for earth science teachers. A project he was particularly proud of was making the late Glen Cole's work on cross sections available online. Rod's expertise in his field brought him opportunities to work in China, Venezuela, and Australia among others. Rod's dedication and expertise in core analysis and sedimentology made him world renowned in his field. Rod married Carol Schiller in 1957 and had two sons, Jefferson and Frederic. He later married Carol Edwards on March 13, 1976. He welcomed her two children, Michael and Alicia Edwards, as his own. Rod enjoyed being a father and was involved in the children's activities. He enjoyed participating in Boy Scouts and loved the outdoors. He took the family regularly on camping, sailing and ski trips. He shared his love of the arts with the children by taking them to the ballet, symphonies, concerts, plays, and museums. He included all the children in his work by taking each individually on geologic field trips. Rod loved to travel and took the family on many vacations. He loved his grandchildren and thoroughly enjoyed spending time with them. Rod was a great mentor and encouraged all the children and grandchildren in their scholastic achievements. Rod was a very generous person who loved all members of his family and was quick to embrace new members. Rod was an avid music lover. He enjoyed music of all kinds, from classical to traditional and dixieland jazz, but his favorite was ragtime. In 1997 he and a small group of volunteers founded Ragtime for Tulsa. They brought professional ragtime musicians to Tulsa to perform concerts and provide educational programs for the Tulsa area schools. They also held contests for students with cash prizes for the top performers. They held a festival in 2007 to celebrate the Oklahoma Centennial and held a contest for composers to write the "Tulsey Town Rag." In spite of his failing health he continued to bring ragtime performers to Tulsa as late as October 2015. Rod is survived by his wife Carol Howard Tillman, her children, Michael Edwards and wife Amber; daughter, Alicia Edwards-Kirk and husband Todd; his son Jefferson and wife Jill; son Frederic and wife Joanne. Rod is also survived by his grandchildren Michelle, Nicole, Brian, Keaton, Caileigh, and Logan. He is also survived by his sister, Elizabeth Burdick and family. He was a member of All Souls and Hope Unitarian churches serving on the music and finance committees at Hope. In lieu of flowers the family requests that donations be made to the Tulsa Geology Society Foundation, PO Box 4627, Tulsa OK 74159; All Souls Unitarian Church or Hope Unitarian Church. More information is available at www.moorefuneral.com . Memorial Service will be held 1:00 PM, Friday, January 29, 2016 at All Souls Unitarian Church. Moore's Rosewood 918-744-1202 www.moorefuneral.com

Roderick Whitbeck Tillman, born February 24, 1934, lost a two-year battle with Leukemia on Thursday, January 21, 2016. During this time, he was a participant in clinical trials at MD Anderson in Houston Texas. He was born in Macomb, Ill.,... View Obituary & Service Information

The family of Roderick Whitbeck Tillman created this Life Tributes page to make it easy to share your memories.

Send flowers to the Tillman family.