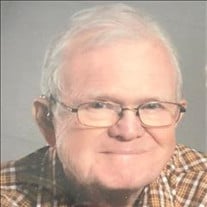 Roger Goodson, 97, passed away on Tuesday, March 15, 2022, in Tulsa. He was born on December 11, 1924, in St. Paul, Minnesota, to Florence and Warren Goodson. After graduating high school, he enlisted in the Army Air Force and fought bravely in World War II. A sergeant, he was a radio operator in a B17 Bomber. After his honorable discharge, he went on to the University of Minnesota where he earned a Bachelor's degree in Business. He met his future wife, Lorraine (Covey) in 1949, and they were married in 1952. She preceded him in death on October 8, 2020. He spent his entire career working as an auditor for City Service Oil and Gas Company (Citgo). He started working for Citgo in St. Paul right out of college, then was eventually transferred to Wausau, Wisconsin, where his sons were born, and to South Bend, Indiana, when his Midwest territory was expanded. He then finished his career in Tulsa, where he retired. He and Lorraine were members of the Christ United Methodist Church and were also active in their retirement community. One of his favorite activities was golf and they enjoyed extensive travel, including Ireland, Hawaii, and several trips to Europe. He also volunteered for several organizations, among them: The University of Notre Dame, Tulsa International Airport, the Oklahoma Aquarium, the BOK Center, and the American Red Cross. Roger is survived by his sons, John, of Mishawaka, Indiana, and Eric (Corinne) of La Porte, Indiana; grandchildren, Andrew (Kimberly) Arndt of Tell City, Indiana, Ashley (Shawn) Fitzpatrick of Dune Acres, Indiana, and Alexander (Kimberly) Keim of Noblesville, Indiana; and great-grandchildren Sophia and Tobin Arndt, and Breck, Pruett, and Evann Fitzpatrick. He was preceded in death by his parents, a brother, Jack, who died fighting in WWII, and his beloved wife, Lorraine. A memorial service is scheduled for 11:00 am on Saturday, March 19, 2022, at Christ United Methodist Church, 3515 S Harvard Ave., Tulsa, Oklahoma, 74135. The family asks that in lieu of flowers, donations be directed to the American Red Cross. Arrangements are entrusted to Moore Funeral Homes, Tulsa.

Roger Goodson, 97, passed away on Tuesday, March 15, 2022, in Tulsa. He was born on December 11, 1924, in St. Paul, Minnesota, to Florence and Warren Goodson. After graduating high school, he enlisted in the Army Air Force and fought bravely... View Obituary & Service Information

The family of Roger W. Goodson created this Life Tributes page to make it easy to share your memories.

Send flowers to the Goodson family.