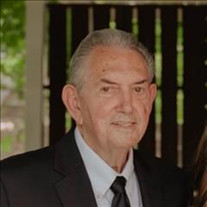 Wednesday, May 11, 2022, Roger Lee Spainhower passed away at the age of 76. He graduated from Will Rogers High School in 1964 and received his Master's Degree from the University of Phoenix. He was a Senior Systems Analyst for the City of Tulsa until his retirement in 2016. Roger loved to play golf, go on cruises, and ride trains. He was a Golf Marshall for The Greens at Owasso Golf Course. His wife, Dot, loves antiques and collectibles so they spent many hours antiquing and golfing. Occasionally, Roger would agree to go antiquing with Dot to help her chase doilies instead of golf balls. Roger was preceded in death by his Father, Billy, and his Mother, Betty. In addition to his wife, Dorothy (Dot), he is survived by his sons, Jason Spainhower, and his wife, Becky, of Columbus, KS, Michael Spainhower, and his wife Candia, of Broken Arrow, OK, daughter, Glatha Agee and her husband, Roger, of Tulsa, OK, step-daughters, Lisa Anderson, and her husband, Dwain, of Owasso, OK, Cheryl Patrick and her husband, Shawn, of Owasso, OK, sister, Kay Jones, of Tulsa, OK, grandchildren, Jaden Spainhower, Cody Spainhower, Tayla Fleck and her husband, Drew, Colton Agee and his Fiancee', Vanessa, Hunter Agee, Bethann Roberts, Ross Spainhower, and his wife Taylor, Dakota Spainhower, step-grandchildren, Emily DelGrosso, and her husband, Connor, Jesse Anderson, Garren Patrick, Brodie Patrick, 10 great-grandchildren, nephew, Aaron Jones of Owasso, and last but not least, kitty cat, Fred. Roger was a long-time member of First Baptist Church of Owasso. He also was a former Sunday School teacher there. He was a former Master Adjunct at Oklahoma Wesleyan University, former Chief Information Officer at First Baptist Church of Owasso, and former President of the Association of Systems Management. He served in the Army National Guard and the Air Force Reserves. His Celebration of Life is scheduled for 10:00 AM on Monday, May 16, 2022, at First Baptist Church of Owasso, 13307 East 96th Street North, Owasso, OK. Viewing will be on Sunday, May 15, 2022, and Monday, May 16, 2022 at Moore's Southlawn, 9350 East 51st, Tulsa, OK, during the hours of 10:00 AM until 8:00 PM. Visitation will be from 2:00 PM until 4:00 PM on Sunday, May 15, 2022. Moore's Southlawn 918-663-2233

Wednesday, May 11, 2022, Roger Lee Spainhower passed away at the age of 76. He graduated from Will Rogers High School in 1964 and received his Master's Degree from the University of Phoenix. He was a Senior Systems Analyst for the City of Tulsa... View Obituary & Service Information

The family of Roger Lee Spainhower created this Life Tributes page to make it easy to share your memories.

Send flowers to the Spainhower family.