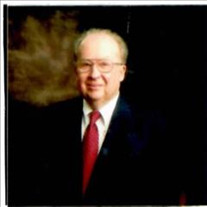 Ronald Norman St. Clair, 84, of Tulsa, OK, passed away on June 15, 2022 at his home. Ron was born in Tulsa to Mary Putnam (Lieberman) and Carmen St. Clair. He grew up with his brothers Jimmy, Larry, and David Lieberman. He graduated from Will Rogers High School in 1955 and went on to Oklahoma State University and graduated in 1960 with a degree in Mechanical Engineering and in 1972 he became a member of the Society of Automotive Engineers. Being a kind and dependable father was of the most importance to Ron and he certainly did not disappoint when it came to wholeheartedly loving his family. Ron loved to fish and not just deep sea fishing, but any kind of fishing. Whether it was sitting on the dock, standing in a river (fly fishing), or out trolling the gulf for that big blue marlin. He did go on several guided-fishing trips for trout and also on one to Alaska, Salmon fishing. After that trip he said he would never be able to eat Salmon again - Salmon for breakfast, lunch, and dinner, was a little too much for him. Ron met his future wife, Theresa Coakley, when they both worked at Crane Carrier. They got married in 1964 and as of April 2022 they celebrated 58 years of marriage. Around 1976 they moved to Seabrook, TX so Ron could start St. Clair Equipment. Then in 1978 they moved to Baton Rouge, LA when Ron bought Hy-Reach Equipment. They spent the next 20 years there and when Ron retired they moved back to Tulsa to be closer to family. In addition to his wife, Theresa St. Clair and his children Ron St. Clair Jr and his wife, Kelly, Sydney St. Clair, and Sheila (St. Clair) Lowe with her husband, Todd. Ron is survived by his brothers Larry and David Lieberman, his nieces Melissa (Lieberman) Jackson, Lisa Lieberman, Michelle Loret, and Samantha Franklin. His nephews Phillip Lieberman, Chris Lieberman, Eric Lieberman, and Christopher Stephens. He was preceded in passing by his mother Mary Lieberman, his stepfather Sid Lieberman, his father Carmen St. Clair, his brothers Jimmy Lieberman and Mike St. Clair, his sisters Cathy St. Clair Stephens and Vicki St. Clair, his nephew Michael Lieberman and his grandson Storm St. Clair. The family would like to thank Tabitha Harper, and Rita Stengel for taking such great care of Ron over the last 5 years. We would not have been able to do this without you. The memorial service will be held at Moore Southlawn Chapel on Thursday June 23, 2022 at 10 am with a reception to follow at 11:00 am. Moore's Southlawn 918-663-2233

Ronald Norman St. Clair, 84, of Tulsa, OK, passed away on June 15, 2022 at his home. Ron was born in Tulsa to Mary Putnam (Lieberman) and Carmen St. Clair. He grew up with his brothers Jimmy, Larry, and David Lieberman. He graduated from Will... View Obituary & Service Information

The family of Ronald St. Clair created this Life Tributes page to make it easy to share your memories.