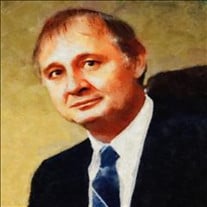 April 23, 1941 -- May 21, 2021 Ronald G. Kolker, longtime member of the Pryor Creek community and a beloved CPA, 80, passed away May 21, 2021 with family by his side. He will be dearly missed by many. The oldest of his siblings, he was born in Lawton, OK and graduated from the University of Oklahoma with a BA in Accounting, where he discovered his passion for numbers and where he met Marjorie, the love of his life. They had been married for 58 years, during which they enjoyed raising a family, putting down roots in the Pryor community and building a successful business and legacy. Ron was a pivotal member of the Saint Martin's of Tours Episcopal Church where he served on the Vestry as a Senior Warden and other positions at various times. During his younger years he enjoyed serving as a Cub Scout leader, T-Ball and basketball coach, past President of the Pryor Sertoma and Lions Clubs, where he enjoyed serving. Founder and partner in Kolker & Kolker, Inc. He officially retired in 2020. As a dedicated City Accountant, Ron was recently honored by the City of Pryor Creek for his many years of service to the City and the community. His portrait is hanging in City Hall. His favorite hobby was working, and all his clients became his lifelong friends. He enjoyed accounting, but he also enjoyed reading Agatha Christie's mystery novels, solving crossword puzzles, and always talked about writing a detective story of his own. He enjoyed the company of his grandchildren (4) and playing with his great-grandchildren (4). He told great stories to his great-grandchildren via Skype during the Pandemic. Football (his beloved Sooners) and golf were his favorite sports to watch. Traveling was also something he enjoyed with his wife Marjorie. They had the distinct pleasure of visiting all 50 states, with Alaska fittingly being the 50th. His favorite destinations were Alaska, followed by Colorado. He preferred "Road Trips" to flying, though they didn't drive to Alaska. A generous man, he would help anyone in need and always had a kind word or advice. He will be missed. Preceded in death by his parents Harold Joseph & Irma Kolker, brother Dennis and baby sister Mary. Survivors include his spouse Marjorie of home, with whom he was married to for 58 years; two sons: Jeffrey & wife, Catalina Kolker of Pryor OK and Christopher & wife, Hai Kolker of Norwich CT; four grandchildren: Nicole & Ryan Gorbet of Tulsa OK, Krista & Sean Breen of Halifax NS Canada, Joseph Kolker and Christian Kolker of Norwich CT; and 4 great-grandchildren. Memorial Service: Wednesday, June 2, 2021 (11am) at St. Martin of Tours, 620 SE First, Pryor, OK Officiant -- Father Robert Gates Interment at Graham Cemetery, Pryor OK In lieu of flowers, the family would request that donations be made to either the Pryor Ministry Center or the Sertoma Senior Citizens Center. Under the Direction of Moore's Southlawn 918-663-2233

The family of Ronald Gene Kolker created this Life Tributes page to make it easy to share your memories.

Send flowers to the Kolker family.