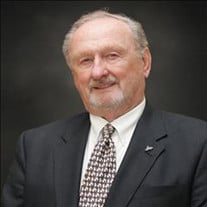 Senator Charles R. Ford of Tulsa passed away on Wednesday, September 1, 2021, at the age of 90. A beloved husband, father, grandfather and great-grandfather, he was also a successful businessman, a pilot, published author, art collector and long-time member and leader of the Oklahoma Legislature. He leaves behind an enduring legacy of public service to his community, his state and his country. Senator Ford was born in Tulsa on August 2, 1931, to Juell and Marzee Ford. He grew up in Tulsa and attended Oklahoma State University from 1949 to 1951. On April 26, 1951, he married Patricia Ojers Ford in Tulsa. The couple had four children: Christopher, Roger, Karin and Robyn. Long active in local and state civics organizations, Charles won a seat in the Oklahoma House of Representatives in 1966. He served 14 years in the House before being elected to the Oklahoma Senate, serving for an additional 24 years. During that time, he held multiple leadership roles, including Senate Minority Caucus Chair, Minority Whip, Assistant Minority Leader and ultimately serving as Minority Floor Leader. Senator Ford's legislative accomplishments were many, but among his greatest gifts to Oklahoma was his leadership in helping restore the Senate and House chambers to a more historic representation of their original architectural designs in the 1990s, which led to his creation of the Oklahoma State Senate Historical Preservation Fund, Inc. Senator Ford recalled after overseeing the restoration of the Senate lounge, he noticed the only art decorating the grand room consisted of "cheap prints." He decided to commission an Oklahoma artist, Wayne Cooper, to paint a historic event from his Senate District's past. "Washington Irving Meeting the Osage" was dedicated in 1998, and after that, other members approached him to do similar projects. Senator Ford's nonprofit organization raised more than $2.5 million in private donations to create a significant collection of original art telling the story of Oklahoma. He received numerous honors throughout his life, from achieving the rank of Eagle Scout as a youth, to serving as state president of the Oklahoma Jaycees in 1959; vice president of the U.S. Junior Chamber of Commerce, 1960 and of the Junior Chamber International, 1964; Oklahoma Outstanding Young Man, 1960; National Republican Legislators Association Legislator of the Year, 1988; American Institution of Architects Oklahoma Presidential Award, 1998, and the Oklahoma Heritage Distinguished Service Award in 1999. Senator Ford was a life member, Board of Directors for the Tulsa Jaycees; a member of the Tulsa Metropolitan Area Planning Commission; the Tulsa State Fair Board, and served on the Board of Governors for the Spartan School of Aeronautics. He also served on the Board of Trustees for OSU-Tulsa and sponsored a scholarship endowment at OSU Tulsa. Charles was preceded in death by his parents, Juell and Marzee Ford, and his brother, Beryl Ford, all of Tulsa. He's survived by his wife of over 70 years, Patricia; son Chris Ford and his wife Jennifer of Tulsa; son Roger Ford and his wife, Gabi, of Claremore; daughter Karin Ford, of Norman; daughter Robyn Turner and her husband, Mike, of Sand Springs; 13 grandchildren, and 17 great-grandchildren. Visitation will be 5-8PM, Tuesday, September 7, 2021 at Moore's Southlawn, 9350 E. 51st, Tulsa, OK. Funeral service will be 11:00 A.M., Wednesday, September 8, 2021 at First Presbyterian Church-Tulsa. Moore's Southlawn 918-663-2233 share memories at www.moorefuneral.com

Senator Charles R. Ford of Tulsa passed away on Wednesday, September 1, 2021, at the age of 90. A beloved husband, father, grandfather and great-grandfather, he was also a successful businessman, a pilot, published author, art collector and... View Obituary & Service Information

The family of Senator Charles Reed Ford created this Life Tributes page to make it easy to share your memories.

Send flowers to the Ford family.