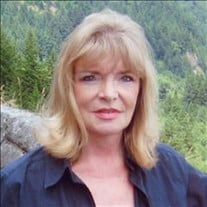 Shirley Mae Law, age 70, died in Tulsa, Oklahoma on March 20th, 2022. She was born on September 11th, 1951 in Cooperstown, North Dakota. She was raised in Portland, OR where she graduated from David Douglas High School in 1970. Growing up she was heavily involved with her church which helped shape her continued walk with the Lord. She married Jim Arnold, on November 12th, 1971 at First Assembly of God in Portland. Soon after, they moved to Tulsa, OK where she worked in the banking industry before starting a family. After her late husband, Jim, passed away she married again to Terry Law, blending two families together where they welcomed their sixth child, Laurie, to the family. Shirley spent the next season of her life being a support to her husband Terry and mother to the children. Shirley enjoyed golfing, skiing and traveling with her family. She prized herself in hosting others at her home. Shirley eventually reentered the workforce as a top real estate agent working both in Tulsa and in the Northwest. After retiring from her real estate career, Shirley continued to serve others by volunteering at a local hospital in Vancouver, WA. She eventually resettled back in Tulsa where she enjoyed being closer to her children and grandchildren. She was preceded in death by her parents, Francis and Iola Paintner as well as her late husbands Jim Arnold and Terry Law. Shirley is survived by her two brothers and spouses David and Keri Paintner and Roger and Jan Paintner; her three children and spouses Shawna (daughter) and Matt Lawrence, Jason (son) and Beth Law, Laurie (daughter) and Cody Wilson as well as her six grandchildren Taylor, Addison, Logan, Matthew, Theodore, and Audrey. Viewing will be 10a-8pm, Thursday, March 24, 2022 at Moore's Southlawn Funeral Home. The graveside will be 2pm, Friday, March 25, 2022 at Memorial Park Cemetery, Tulsa. Moore's Southlawn 918-663-2233

Shirley Mae Law, age 70, died in Tulsa, Oklahoma on March 20th, 2022. She was born on September 11th, 1951 in Cooperstown, North Dakota. She was raised in Portland, OR where she graduated from David Douglas High School in 1970. Growing up she... View Obituary & Service Information

The family of Shirley Mae Law created this Life Tributes page to make it easy to share your memories.

Send flowers to the Law family.