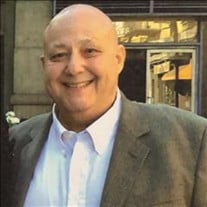 Solomon H Bayouth II, 73, passed away peacefully with family on May 13, 2022. Sol was born in Tulsa on September 16, 1948 and grew up in Jenks, America where he went on to proudly graduate from Jenks High School. He studied at Oklahoma Military Academy, Oklahoma State University, and Northeastern State University where he was a member of Phi Sigma Epsilon fraternity. After college, Sol joined his cousin Jon Bayouth in the entertainment scene where he had the role of bar manager at the Copa Club and assistant manager at the iconic nightclub Ziegfeld's. He later went on to operate Hamburger Haven, PeeWee's Burgers, and Sol's Grill. Following his time in the restaurant business, he entered the wireless phone industry, opening Cellular Communications in the Farm Shopping Center. Sol had many passions in life. He was an avid sports fan and enjoyed watching and attending numerous sporting events throughout the years. He proudly loved the Jenks Trojans, OSU Cowboys, and OU Sooners. He was lucky to attend some great sporting events - including many MLB World Series, NBA finals, NFL post season games, golf championships, and world championship boxing matches, including sitting ringside at Muhammad Ali's title fight in 1978. He tried to fit in as many joys as possible in life - one time in the span of 30 hours, he attended the Byron Nelson golf tournament, a double hitter MLB Rangers game, and a NFL Houston Oilers game. On another occasion, he attended 2 NFL games in one day in separate cities. He formed many special friendships with those in the Tulsa sporting world. As a hobby, he enjoyed playing professional poker, playing in many tournaments throughout the years. He enjoyed watching the horse races, especially when visiting Oaklawn in Hot Springs. He frequently traveled to his favorite destination, Las Vegas, where he looked forward to the fine dining, shows, playing cards, and staying at the Desert Inn. In addition to sports, he also had a love for music, attending more concerts than one can count, including these greats... The Beatles in 1966, Elvis, Sinatra, Paul McCartney, and the Eagles. He treasured his friendships with those in the Tulsa music scene as well as becoming close friends to many national entertainers during his time at Ziegfeld's. He was also a true foodie and connoisseur of all foods. He appreciated a good hamburger, a juicy ribeye, fried chicken from the Celebrity Club, and traditional Lebanese meals cooked by family. In 1987. He competed in the Arkansas State Chili cook-off alongside Billy and Anita where they took first place. They later went on to compete in the world championship. Sol enjoyed eating out with his friends and visiting local restaurants around town. Sol cherished spending time with all of his family and friends but his single most cherished role was being "Uncle" to Morgan and William. He is preceded in death by his father William S. Bayouth Sr., mother Josephine Bayouth, and his cherished yorkie Cocoa. He will be greatly remembered and forever missed by his brother Billy, sister-in-law Anita, niece Morgan, and nephew William - as well as his numerous aunts, uncles, and cousins. He will also be greatly missed by his many friends whom he treasured as family. All services will be held at St. Antony's Orthodox Christian Church, 2645 East 6th Street, Tulsa under the direction of Moore Funeral Home. Viewing and visitation with family will be at Saint Antony's on Tuesday, May 17th beginning at 4:30pm followed by the Trisagion Prayer service at 6:30pm. Funeral service will be held at 10:30am Wednesday, May 18th, followed by internment at Calvary Cemetery. Memorial contributions can be made or sent to St. Antony's Orthodox Christian, flowers can be delivered to the church after 4 on Tuesday, or to Moore's Rosewood

Solomon H Bayouth II, 73, passed away peacefully with family on May 13, 2022. Sol was born in Tulsa on September 16, 1948 and grew up in Jenks, America where he went on to proudly graduate from Jenks High School. He studied at Oklahoma Military... View Obituary & Service Information

The family of Solomon H. Bayouth, II created this Life Tributes page to make it easy to share your memories.

Send flowers to the Bayouth family.