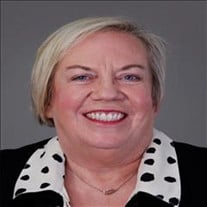 Memorial Services for Susan are delayed to a future date that will be announced. Celebrating the Life of Susan Owen Tryon: "Bridge Builder with her talents" and "Bridge Maker in her heart". Sue is especially known and honored as a part of... View Obituary & Service Information

The family of Susan Pauline Tryon created this Life Tributes page to make it easy to share your memories.

Memorial Services for Susan are delayed to a future date that...

Send flowers to the Tryon family.