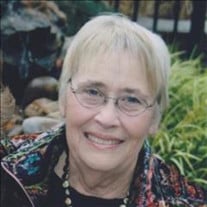 Susan Lee Harless, 74, slipped away on August 17, 2021. She was born at St John's Hospital in Tulsa, OK to Virginia L (Bowles) & Thomas Edward Gage, Jr on August 2, 1947. While attending Sequoyah Elementary, in 2nd grade, her dad's IT job with Loffland Brothers Petroleum took the family, including baby sister Marianne, to Maracaibo, Venezuela and on to Cartagena, Colombia, returning to Tulsa six years later. It was an incredible experience, one that created life-long friendships and unforgettable Caribbean memories. Once back stateside, she attended Wilson Junior High, where her parents had attended, then graduated Edison High School in 1966. She earned her B.A. degree in Secondary English from the University of Tulsa, Class of 1970. Starting out teaching at Will Rogers High School, she later decided more money was to be had working as a salesclerk for Extension One at Southroads Mall, then as a receptionist for Ackerman Advertising in downtown Tulsa. Wedding bells rang in 1973 with Don Harless and eventually settling down in Bixby. The family grew, with Mark arriving in 1976, Todd following in 1980. Don's job with Rockwell International (aviation), Tulsa, lead them to move to Kent, WA, in 1988, where she was a librarian and substitute teacher for Kent School District. She loved it when family would visit, being the tour guide extraordinaire for Seattle and the beautiful surrounding area of NW Washington and Vancouver. To make 2000 (aka Y2K Millennium) even more unique, with the boys graduated, Don's job found them moving to Tianjin, China, about 80 miles from Beijing. Being an ex-pat in China, she found it both challenging and exciting. Susan loved history, cultures, people, which she marveled at. So, armed with her wonderful wit, beautiful smile and determination, she settled into this new adventure! All of those that came to visit (a mere 12 hr hop on a jet!) during those 6+ years had an experience of a lifetime, that she deftly orchestrated each time. A year before China hosted the 2008 Olympics, they returned to Tulsa, where she found the perfect patio home & settled in. Susan soon found a job she loved with "From the Heart", making logo-themed jewelry. Time with family and friends, especially having her boys and grandkids only a brief plane ride away was answered prayer...life was good! Susan loved the Lord and faithfully attended First Baptist Church in downtown Tulsa and then Life Church at South Broken Arrow. How we will miss her heart as big as the universe, a mind as amazing and knowledgeable of any and all things, the way she could have you bursting with laughter by her incredibly spontaneous wit, that brilliant smile, her goofiness, her love for all things whimsical, and of course, her love of flashlights. Susan was preceded in death by her parents. She leaves behind two sons, Mark Harless & wife Jodie and their children, Zandra & Makennah Harless, Wesley Haertling, Charlie Pounds and Chloe Pounds. Son Todd Harless & wife Alicia and their children, Declan & Carter Harless and Raegan Chesher, daughter Shelli McAlister and her children Brooke, Jonathan, Jacob & Alex Adams. She is also survived by her sister and brother-in-law, Marianne & Dick Tullis, nephew Matt Parker (Dylan, Daegan/Kyli Philliber), nieces Jill & Rob Muraoka (Gage, Sasha), Vicki & Lanny Hammons (Kelsea/Kingston, Halle, Anna), and a host of cousins. Her Celebration of Life and interment will be at Moore's Southlawn, on Friday, August 20, at 2:00pm. Memorials can be made to Clarehouse and Humane Society of Tulsa.

The family of Susan L. Harless created this Life Tributes page to make it easy to share your memories.

Send flowers to the Harless family.