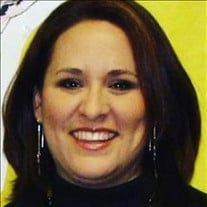 Suzanna Marissa Payan-Beets, "Marissa", was born September 3, 1971 in El Paso, Texas to Antonio Rocha-Payan and Wilma Morales-Payan. She passed on November 2, 2021 in Tulsa, Oklahoma at Saint Francis Hospital from complications stemming from COVID-19. She was surrounded by her Husband, Scotty, Daughters, Jasmine and Gabriella, Mother, Wilma, Brother Mario, Sister-in-Law Eunice, and Mother-in-Law Laura Bingham. Marissa is survived by her Husband, Scotty Wayne Beets of Tulsa, Oklahoma, Daughters, Jasmine Antoniette Payan-Beets and Gabriella Fern Payan-Beets, both of Tulsa, Oklahoma, Son, Stephen Adam Leven of Newkirk, Oklahoma, Daughter-in-Law Kendra Leven, Granddaughters Rilynn Leven and Rhyatt Leven, Grandsons Aceyn and Emmet. Marissa is survived by her Mother, Wilma Payan of El Paso, Texas, Brother, Mario Payan of El Paso, Texas, Sister-in-law, Eunice Payan of El Paso, Texas, Nieces Yaretzi Payan and Giovanna Payan, both of El Paso, Texas, Nephew Cristian Payan of El Paso, Texas, and Grandmother Lily Morales of El Paso, Texas. Marissa is survived by her Father-in-Law Dennis Beets of Ponca City, Oklahoma, Mother-in-Law MaryAnn Beets of Ponca City, Oklahoma, Mother-in-Law Laura Bingham of Tulsa, Oklahoma, Sister-in-Law Jennifer Thibodeaux of Katy, Texas, Brother-in-Law Jason Thibodeaux of Katy, Texas, Brother-in-Law Jeff Beets of Ponca City, Oklahoma, Sister-in-Law Ana Beets of Ponca City, Oklahoma, Brother-in-Law Jordan Beets of Ponca City, Oklahoma. Nephews Jeremy Burns of Katy, Texas, Jace Thibodeaux of Katy, Texas, and Ethan Beets of Ponca City, Oklahoma. Nieces Jillian Thibodeaux of Katy, Texas, Alivia Beets of Ponca City, Oklahoma, and Avery Beets of Ponca City, Oklahoma. Marissa grew up in El Paso, Texas, attended Eastwood High School, and graduated in 1989. While growing up in El Paso, Marissa ran cross-country and played softball; Marissa's passion was playing the violin. Marissa played in the Eastwood High School Orchestra and played violin in her high school's mariachi band, even performing for the former first lady of the United States, Claudia Alta "Lady Bird" Johnson. She attended New Mexico State University after high school; graduated in 1993 with a Bachelor of Science in Social Work. While attending university, Marissa played violin for the New Mexico State University Philharmonic and the Las Cruces New Mexico Orchestra. Post-graduation, she worked in social services and mental health. Marissa served her communities working in juvenile probation, counseling, and case management. Marissa was a devout Catholic, ever strong in her faith. She exercised her faith in God and service to her community when continuing her professional career at Catholic Charities in Tulsa, Oklahoma beginning in 2010 and ending in 2021. She served God as an Adoption Case Manager, Disaster Case Manager, and Case Manager at the Catholic Charities Clinic. Her predominant roles were that of loving wife and mother. Marissa met her husband, Scotty, in 1993 at a wedding; then, two years later they found each other in July 1995 and were inseparable. They married on March 1, 1996. Marissa and Scotty had two daughters. She took a break in her professional life to dedicate herself to raising her daughters and caring for her family. Marissa stayed in frequent contact with her brother, Mario, and her mother, Wilma. Their well-being was very important to her. She often spoke of her need to remain close to her family, to remain connected to her roots and honor her late father, Antonio Payan. Marissa was known by those who knew her as kind, understanding, accepting, and genuine. She put others ahead of herself, always selfless in the face of any adversity. Marissa was always more concerned with others' happiness over her own. She was a testament to what love and acceptance are meant to be. Marissa is forever loved and will be forever missed. She is no longer in pain; forever at peace in God's hands. Viewing will be held at Moore Funeral Home-Southlawn Chapel from 10 am to 8 pm on Monday, November 8, 2021. Funeral Service will be at 11:00 am Tuesday at the Church of Saint Mary, 1347 E 49th Place, Tulsa, Ok 74105. Funeral Service will also be available by livestream at ChurchofSaintMary.com Moore's Southlawn 918-663-2233

The family of Suzanna Marissa Payan-Beets created this Life Tributes page to make it easy to share your memories.

Send flowers to the Payan-Beets family.