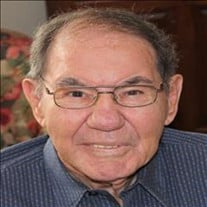 Thomas L. Carter, 93, died January 30, 2022, at Homestead Assisted Living in Wichita, Kansas. He was born September 11, 1928, in Greenwood, Arkansas, the son of Thomas Alexander Carter and Emily McDonald Carter. He moved to Sallisaw, Oklahoma, at age 10 when the government bought his family's farm to develop Fort Chaffee. Living and working on the farm, he attended Central High School, graduating in 1947. He joined the Air Force and served from 1948 to 1952, as part of the Berlin Airlift. On May 9, 1953, he married Opal Randolph in Sallisaw. They moved to Los Angeles, where their daughter, Kimberlee was born. In 1959, they moved to Tulsa where they raised Kimberlee. In 1992, he married LaHoma Goodner. They lived in Tulsa and in Tahlequah, Oklahoma. They loved traveling and square dancing. He also enjoyed playing pool with his buddies and hunting (although he managed to never shoot an animal, claiming he "missed" every time.) In 2015, he moved to Wichita to be near his daughter. He made friends easily, especially enjoying fishing, dominoes and eating with his best friend Nell Kaba. Being in the auto body repair business, he was a hard worker and greatly valued work. He was a gentle man who laughed often and loved to tease. He was a member of Northside Church of Christ. Survivors include his daughter, Kimberlee Yeakley and her husband, Mark of Wichita; two grandchildren: Ryan Yeakley of Wichita, and Rachel Sewell and husband, Zach of Kansas City, Missouri; three great-grandchildren: Mia Scarlett, Carter Thomas Sewell and Daniel Mark Sewell, all of Kansas City; stepdaughter Guila Goodman; step-granddaughter Jenna Coulter; and step-great-grandson Kolby Ford, all of Verdigris. He was preceded in death by his two wives; his father and mother; two brothers, Malla P. Carter and Harvey L. Carter; and his sister, Agnes Moore. Burial will take place at Memorial Park Cemetery in Tulsa, Oklahoma. A Celebration of Life Ceremony is pending under the direction of Moore Funeral Home, Southlawn Chapel in Tulsa.

The family of Thomas Louis Carter created this Life Tributes page to make it easy to share your memories.

Send flowers to the Carter family.