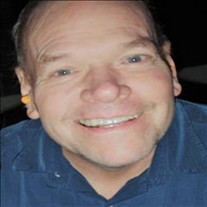 Thomas (Tom) Charles Dailey passed away on May 10, 2022 at the age of 64, in Broken Arrow, Oklahoma after a long battle with cancer-related health issues. His long battle with cancer and other serious medical issues showed his faith in facing life challenges with a smile. Despite all the hardships in his life, Tom stayed strong until the end, often with a smile on his face. Tom was born to Bob and Helen Dailey on August 1, 1957 in Pittsburg, Pennsylvania. After graduating from high school in Broken Arrow, OK, he spent the majority of his career in the food and beverage industry. Tom met his wife, Braunda, in Corpus Christi, Texas. Together, they had two children, Shane and Breanna. He has one granddaughter, Carter Rickner. He now joins his sister, Jill, and his beloved dog, Brennon. Throughout his life, Tom enjoyed spending time with his family, whether it involved watching or coaching their sports teams, camping, or playing at the beach. When he wasn't at a soccer game, he could often be found in the kitchen, either doctoring up something good for everyone to enjoy or sampling a little bit of everything. Tom was active in his church and spent much of his time working with the youth. Private Family Services will be held at a later date. Moore's Southlawn 918-663-2233

The family of Thomas Charles Dailey created this Life Tributes page to make it easy to share your memories.

Send flowers to the Dailey family.