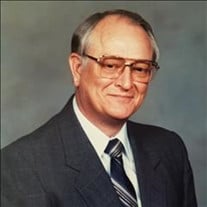 Tom Wing, 83 years, went to be with his Lord on December 2, 2021. Tom was born on December 16, 1937 to Thomas and Nellie Wing in Van Buren, Arkansas. Tom started work when he was 12 years old throwing newspapers. He had two of the biggest routes in Tulsa. Of course! He also worked at Sam's Market. He graduated from Will Rogers High School. He took some engineering night classes at TU. Tom was a 32 degree Mason. He worked for Ben McKalip Co. in sales. During this time for the next 8 years he served in the Navy Reserves. He started at Ben McKalip Co. at 19 and ended up purchasing the company from Mr. McKalip which then became Tom Wing Co., Inc. He sold the company in 2013 and retired. After retirement, he loved his shop. He had three tractors and liked to get out and mow and brush hog around our 20 acres. For the past three years he wasn't in very good health and he had to slow down, which he didn't like. We were married for 42 great years. He is survived by his wife, Vicki Wing, his children Dennis Wing (Renee) and Danette O'Connell; grandchildren, Joshua Wing, Zachary Casey and Ana O'Connell; sisters, Alice Galusha and Sarah Wing and his nephews Gene Gibson (Christina), Russell Hanby (Aubree) and nieces, Michelle Senaca (Clayton), Becki Peterson (Glenn), Lanette Clark and Ashley Scanlon. He is also survived by his loving fur buddy Hank. He was preceded in death by his parents, daughter Denise Casey, grandson Daniel Casey, sister Edna Hanby and niece Lisa Treckman. A small service is planned for family and close friends 10 am, Tuesday, December 7, 2021 at Moore's Southlawn Chapel, followed by interment at Memorial Park Cemetery, Tulsa. In lieu of flowers, memorial contributions may be made to Shriners Hospitals for Children, The Little Light House or King of Kings Lutheran Church in Glenpool, OK. The funeral service will be webcast on Tom's obituary page beginning 10 am, Tuesday, December 7, 2021 at www.moorefuneral.com.

Tom Wing, 83 years, went to be with his Lord on December 2, 2021. Tom was born on December 16, 1937 to Thomas and Nellie Wing in Van Buren, Arkansas. Tom started work when he was 12 years old throwing newspapers. He had two of the biggest... View Obituary & Service Information

The family of Thomas E. Wing, Jr. created this Life Tributes page to make it easy to share your memories.

Send flowers to the Wing family.