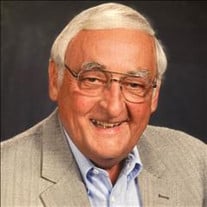 We lost our beloved Robert Thomas Kuehnert (Tom) on Saturday, May 29th at the age of 82. Tom died peacefully with family at his side after a recent diagnosis of cancer. Tom was born in Chicago, Illinois on March 20, 1939 to his parents Alice Hilda (Schuenhof) Kuehnert and Edward C. Kuehnert. He is survived by his brothers James F. Kuehnert of Mitchell, Nebraska and John E. (Jack) Kuehnert of St. Louis, Missouri; his wife of 57 years, Judith (Dick) Kuehnert, of Tulsa, Oklahoma and his children Kimberly Ann (Kuehnert) Shannon of Tulsa, OK; Matthew Robert Kuehnert of Lee's Summit, MO.; Timothy Thomas Kuehnert of Tulsa, OK and Daniel Jacob Kuehnert of Jenks, OK. Tom moved frequently as a child due to his father's work as a Lutheran pastor and chaplain during WWII. Tom graduated from Clayton High School of St. Louis, MO in 1957. He completed his B.A. at the University of Missouri and graduated in 1961. He completed a M.S. degree in Occupational and Adult Education in 1991 at the Oklahoma State University. Tom met Judy Dick in St. Louis, MO and they married in August 1963. In 1972 Tom and Judy moved from St. Louis to Tulsa, Oklahoma. Together they raised four caring and successful children in a fun-loving household. For most of his professional life, Tom was self-employed as a sales representative or a corporate trainer/educator. Tom truly had a servant's heart. His faith in God's Grace, through Jesus Christ moved him to help so many. He was always mindful of those who he could help in any way. Whether it was something simple, like delivering one of his famous off-color greeting cards or a big commitment- like loaning out his car and giving driving lessons (when his own ability to drive safely was quite suspect), he never stopped helping. His Faith was as quiet and strong, like the tide moving slowly and powerfully without attracting attention. The attention came from him in the form of many close personal relationships. Attention also to a people he didn't know through his work as Evangelism Ministry chairman at CTR, delivering hundreds of Bibles to local restaurants and teaching Bible classes at Yale Manor. He wanted people to know Christ as their Savior. The Holy Spirit gave him courage to be bold in His endeavors and to lead by example. Tom was a man of big ideas and a passionate pursuer of answers. An avid reader and researcher, he was frequently armed with a personally curated, illegibly annotated, stapled printout for someone he was wanting to help - "I have something interesting for you to read" was the oft-quoted intro. Tom's sense of humor was legendary. Newcomers to "Tom Terrific' s" wit were usually blindsided with confusion. He operated in the stratosphere of obscure references and quips, which flowed profusely to anyone in his vicinity. Complete strangers and QuikTrip cashiers were his frequent targets. After a few rounds of confusing comments like "you look stunning, but your shirt is on backwards", his endearing personality soon took hold, revealing his lighthearted, free spirit. His mischief traits were strong, always to get a laugh for himself or others. He bolted a gallon paint can to his back bumper to ward off tailgaters. He ran down a dozen traffic barrels (not cones- the BIG ones) in the middle of Sheridan to the sheer delight of his kids. He was the delight of so many, a necessary joker in a too serious world. Our hearts are broken at the loss of our devoted husband, father, grandfather, brother, and uncle. Tom was very proud of and loved his grandchildren; Brian and Gary Mandl of Kansas City, children and stepchildren to Mary Jane and Matt Kuehnert; Kimberly and Jude Kuehnert, children of Tim and Kayla Kuehnert; Karen Tatum Cole, child of Nikki Kuehnert and Maddox and MaKenna Kuehnert, children of Dan and Nikki Kuehnert and Josh Antoine, child of Dan Kuehnert. A funeral service will be held for Tom at Christ the Redeemer Lutheran Church at 2550 E 71st Street on Friday, June 4th at 1:00pm Please share your memories of Tom at: www.moorefuneral.com

We lost our beloved Robert Thomas Kuehnert (Tom) on Saturday, May 29th at the age of 82. Tom died peacefully with family at his side after a recent diagnosis of cancer. Tom was born in Chicago, Illinois on March 20, 1939 to his parents Alice... View Obituary & Service Information

The family of Tom Kuehnert created this Life Tributes page to make it easy to share your memories.

We lost our beloved Robert Thomas Kuehnert (Tom) on Saturday,...

Send flowers to the Kuehnert family.