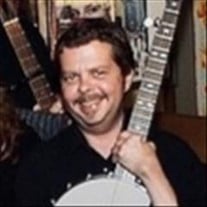 Trent Allen Snider, 55, passed away early Friday morning, June 18, 2021, due to complications from rheumatoid arthritis and its interference with healing from major surgery. He was surrounded in love with family present when he passed. Trent was born on June 30, 1965, to Donald Allen and Lucille Margaret Snider in Colorado Springs, Colorado. He attended elementary schools in Colorado Springs and Denver, Colorado, Lakeland, Florida, and Tulsa, Oklahoma. He moved to Belleview, Florida, to reside with his father in 1980 and attended Lake Weir High School. Trent earned his Bachelor of Arts degree in Anthropology from the University of Florida. He was a history buff with keen knowledge of multicultural historicism, as well as pop culture. He loved old movies and music from past decades. Trent was a gifted self-taught musician, inherited from family. He played the trombone in high school and in the University of Florida Gator Band. In his twenties, he enjoyed playing his horn and singing in his band, "Tone Unknown," that was popular with locals of Gainesville, Florida. He supplemented his music income with restaurant jobs where he developed cooking and restaurant management experience which he utilized the majority of his career. Trent valued and strived to maintain his independence despite his growing physical challenges caused by the arthritis he had been plagued with since age 9. He loved his adventure of living in San Francisco for 6 years where he mastered playing the banjo in a band while making several good friends there. Most recently, Trent treasured his independence living in his home in Tulsa next door to his good friend, Pat, with his cherished cat, Annabelle. Trent enjoyed vacations with his family, visiting various states, and especially loved a couple of trips to Hawaii which included the company of his nephews. Trent is survived by his mother, Lucille Mann of Tulsa, Okla.; his father and stepmother, Donald and Carolyn Snider of Baker, Florida; his sister, Tracy Thomas (husband, Steve) of Tulsa, Okla.; his nephews, Kevin Trent Thomas of Oklahoma City, Okla. and Christopher Thomas of Tulsa, Okla; his stepbrother, Bobby Mann Jr.; his stepsister Kim Doak (husband, Justin) and nieces Langley and Logan Doak of Bixby, Okla. Trent was preceded in death on June 12, 2021, by his stepfather, Bob Mann. Memorial Service will be held at Moore Funeral Home, Southlawn Chapel, 9350 East 51st Street, Tulsa, Oklahoma, on Tuesday, June 29, 2021, at 10:00 a.m. Interment will be in Roanoke, Virginia, at Cedar Lawn Memorial Park. Moore's Southlawn 918-663-2233

Trent Allen Snider, 55, passed away early Friday morning, June 18, 2021, due to complications from rheumatoid arthritis and its interference with healing from major surgery. He was surrounded in love with family present when he passed. Trent... View Obituary & Service Information

The family of Trent A. Snider created this Life Tributes page to make it easy to share your memories.

Send flowers to the Snider family.