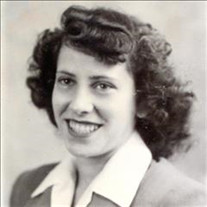 Vatis June Walker was born June 24, 1927 to Samuel M. and Ida Iola (Hollandsworth) Halliburton in Sperry, Oklahoma. June grew up in Turley, Oklahoma and graduated from Cherokee High School. She later met the love of her life, Donald Ray Walker; they were married February 21, 1947. They were together till Donald passed in January of 2017, sharing almost 70 years together. June and Donald had three loving children, Kathie, Sam and Angel. June worked for Sooner Pipe and Supply for many years, retiring in 1992 as the Executive Secretary to the company's President, Mr. Henry Zarrow. She was a long-time attendee of Turley United Methodist Church in Turley, Oklahoma and of Will Rogers United Methodist Church in Tulsa, Oklahoma. June was active in the Hominy Garden Club for many years. She loved quilting and gave many of her handmade treasures to family and close friends. Her greatest passion was her family. June enjoyed traveling with her dear husband Don. They traveled all over the world, including Italy, England, Australia, Ireland, Scotland, Venice, and China. On Saturday, June 5, 2021, June passed away surrounded by her loved ones. June was preceded by her parents, Samuel and Ida; husband, Donald Walker; sisters, Jane, Thelma, Alma, Delia and Dema; and brother, Preston. She is survived by her daughters, Donna Kathrine Wattenbarger (David) and Angela Michelle Gabal (Roger); son, Clifford Samuel Walker (Lori); grandchildren, Mark Wattenbarger, Scott Wattenbarger, Steven Walker, Josh Turnbow, Amber Walker, Robert Gabal, Margret Elizabeth Mendoza and Sarah Gabal; ten great-grandchildren and a host of loving friends. In lieu of flowers the family asked that a contribution be made to the charity of your choice or your favorite Military charity in June's name. Viewing is Noon to 8PM, Thursday, June 10, 2021 with family present for visitation from 4PM to 6PM at Moore's Southlawn Chapel, 9350 E 51st, Tulsa, OK. Graveside service will be 1PM, Friday, June 11, 2021 at Sperry Rest Haven Cemetery in Sperry, OK, 1609 W 103rd St N, Sperry, OK 74073.

The family of Vatis June Walker created this Life Tributes page to make it easy to share your memories.

Send flowers to the Walker family.