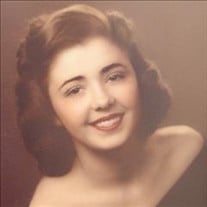 Verlean Vaughn Smith of Tulsa, Oklahoma, passed away August 10, 2021, at the age of 89. Verlean was born December 19, 1931, in West Point, Arkansas, the oldest child of John Crockett and Mary Louise Millsap Vaughn. She attended West Point schools and following graduation worked in Little Rock as a secretary for two years. She then moved to Tulsa, OK, where she worked for several years as a secretary for Sinclair Oil & Gas Co. before attending Tulsa University. At TU she earned her B.S. in Education, her B.S. in Nursing, and her M.A. in Guidance and Counseling. She worked with the Tulsa Public Schools from 1973 to 1984 teaching children with learning disabilities. During this time, she worked part-time as an RN at both Tulsa Hospitals and attended Oklahoma State University receiving her Ed.D in 1983. In 1984 she returned to nursing full time. Her last job assignment as a nurse was at age 75. She was a member of Kappa Delta Pi Honor Society and a member of Tulsa Baptist Temple. Verlean married Charley Smith in 1952. Although divorced in 1997, they remained dear friends until his death in 2016. She is survived by 2 sons, Charles "Greg" Smith of Tulsa, Gary Smith of Steamboat Springs, CO; three grandsons, who were the light of her life, Adam Smith of Steamboat Springs, Cody Smith of San Francisco, and Tony Smith of Denver, CO; 2 great-grandchildren, Isabella and Jaxon Smith; and one sister, Oma Dee Darais and husband, Frank, of Richardson, TX, along with many nieces, nephews and cousins. Verlean was preceded in death by her parents, her sister, Johnnie LaFerney, and her brother, Jay Vaughn, of West Point, AR. Verlean enjoyed gardening, landscaping, reading, crafts, sewing, and decorating her home. She was loved by many and will be greatly missed by her family and friends.

The family of Verlean Smith created this Life Tributes page to make it easy to share your memories.