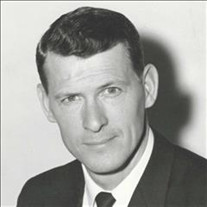 Waldo Arthur Barron, 91, a resident of Tulsa, Oklahoma, went to be with his Heavenly Father on Thursday, September 30, 2021. He was born on October 7, 1929, in Mannford, Oklahoma, to William Arthur and Irma Virginia Barron. Waldo married the love of his life, Jo Ann Liebrand on September 8,1949 in Enid and they enjoyed 71 years of marriage, sharing a life filled with the love of family and friends, and service to their church and community. Wally and Jo Ann raised four children who have wonderful memories of their father. He was known as "DadDad" to his grandchildren and is remembered most fondly for his outgoing nature, sense of humor, kindness, and gracious love. He relished the opportunity to take the family on vacation and did his best to provide each of us a fun time. He instilled in his children a great work ethic, an appreciation for simple pleasures and the outdoors. He was gifted with a positive attitude in life by his parents and he shared that with his children. He would be the first to give you the last nickel in his pocket with a smile on his face, as he finished washing your windshield after you had already started driving away. Christmas always created wonderful memories. Wally and Jo Ann shared generosity, thoughtfulness and love each season, inspiring the importance of faith and family. Despite often working multiple jobs to meet the family needs, he was always there when we needed him, shielding us from the difficulties of life that parents experience. Our dad was a jack of all trades, demonstrating his ability to thrive in his career while maintaining the house, lawn, cars, family, and church as well as sharing his love and his athletic ability in sports. His commitment, dedication and ability to prioritize life's challenges will be fondly remembered and his graciousness will live in the hearts of all he touched. Wally held a variety of jobs while growing up, starting at the grocery store in Goltry at age 11. He met Jo Ann in Helena, Oklahoma while in high school. They both attended Phillips University in Enid starting in September of 1947. By 1955, Wally was working for Sinclair Oil, which later became ARCO. After being promoted to senior clerk and transferring to the Tulsa office, the family moved to Tulsa in 1962. He retired from ARCO in 1985. He also established and operated a successful consulting company to the oil and gas industry, Waldo A. Barron and Associates. Waldo was a faithful member and leader of Community Christian Church in Tulsa. He was an elder and board member in the church for many years and provided a shining example of service and charitable giving to others. He gave blood regularly to the American Red Cross throughout his adult life and volunteered there after his retirement. Wherever he went, he was loved and appreciated for his overflowing kindness. Waldo is survived by his daughter, Cathy Cameron, husband, Dan and granddaughter, Kelly Cameron. Son, John Barron and grandson, Bryce Barron. Son, Brent Barron, wife Sandra, granddaughter, Sarah Greene, and grandson, Micah Barron. Son, Brock Barron, wife, Paula, granddaughters Hayden and Elliot Barron. He is also survived by his sisters, Patricia Hileman and Jan Dely, as well as nieces, nephews and in-laws. Wally will be great missed, but his spirit and memories will live on within each of us. We were so privileged to have him in our lives. Funeral Services will be 2:00 p.m., Monday, October 4, 2021 at Moore's Southlawn Funeral Home, 9350 East 51st Street, Tulsa, OK 74145

Waldo Arthur Barron, 91, a resident of Tulsa, Oklahoma, went to be with his Heavenly Father on Thursday, September 30, 2021. He was born on October 7, 1929, in Mannford, Oklahoma, to William Arthur and Irma Virginia Barron. Waldo married the... View Obituary & Service Information

The family of Waldo A. Barron created this Life Tributes page to make it easy to share your memories.

Send flowers to the Barron family.