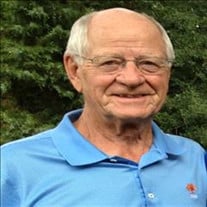 Walter Duane Anderson passed away peacefully on May 12, 2022, after a short illness, with his three children by his side. He was born in Williston, North Dakota on April 24, 1935, to Walter and Geneva Anderson. He married Donna Sundet on September 5, 1959 and remained a devoted and loving husband and caregiver until her passing in January 2021. Duane attended the University of Minnesota for 2 years prior to enlisting in the US Army in 1955. After leaving the army in 1957 he completed his petroleum engineering degree at the University of North Dakota. He was a member of the Phi Delta Theta fraternity. Duane was a natural athlete and played various sports in high school and led the Williston Coyotes to State Football Championship in 1952. He worked for various employers in the energy industry during his career but spent 28 years at Reda Pump in Bartlesville, Oklahoma in 1970 where he and Donna raised their family. While with Reda he traveled the world helping to establish Reda's international footprint. He was a true "company" man. His retirement years were mostly spent in Edmond, Oklahoma where he was active in Saint Mark Lutheran Church. He was an avid golfer and fisherman. He also loved tending his bird feeders, vegetable garden and fixing things around the house. He also loved grilling ribs for his grandkids. He was a quiet, friendly, kind, gentle and loyal man who lived his life with integrity. In 2014, he and Donna moved to the Tulsa area to be closer to their kids and later became part of the Inverness Village Community in Tulsa in 2017. He loved giving his produce to his Inverness neighbors and enjoyed spending happy hour at the Bistro. At the time of his death, he was a member of Christ the Redeemer Lutheran Church in Tulsa. He is survived by his three children, Greg of Tulsa, David of Owasso, and Kristen (Harris) and husband Jeff, of Bixby. He is also survived by his seven grandchildren which he loved dearly, Samantha, Dylan, Sydney, Luke, Eli, Caden and Ryan and great-granddaughter Caroline. He is also survived by his sisters Bernice Walton of Bismarck, North Dakota, Jan Evingson of Minneapolis, MN, and Donna Gale of Wyzeta, MN and various cousins, nieces, and nephews. A service, officiated by Pastor Scott Burmeister, will be held at Christ the Redeemer Lutheran Church in Tulsa on May 19,2022 at 2:00. Services will also be live streamed for those who wish to attend on-line. In lieu of flowers, the family requests the donations be made to Clarehouse, a Tulsa hospice house (www.Clarehouse.org) or the Alzheimer's Association. Moore's Southlawn 918-663-2233 share memories at www.moorefuneral.com

Walter Duane Anderson passed away peacefully on May 12, 2022, after a short illness, with his three children by his side. He was born in Williston, North Dakota on April 24, 1935, to Walter and Geneva Anderson. He married Donna Sundet on September... View Obituary & Service Information

The family of Walter Duane Anderson created this Life Tributes page to make it easy to share your memories.

Send flowers to the Anderson family.