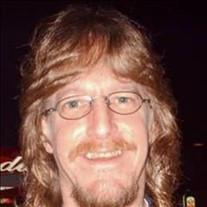 Warren Wesley Walton passed from this life at the age of 57 on January 31, 2022. He was born in New Brunswick, NJ on August 29, 1964 to Luckey J Walton Jr. and Patricia Ann Walton. He lived in East Brunswick, NJ with his 2 sisters, Teresa and Vickey, and was known in the neighborhood as the "3w kid". He attended Bowne Elementary School and Hammarskjold Jr High and excelled at gymnastics. The High School coach couldn't wait for him to get to High School so he could have Warren on the team. This was not meant to be as his family moved to Oklahoma when Warren was 15. His family settled in Broken Arrow and he attended Broken Arrow HS and then Okmulgee Technical College where Warren was studying to be an Auto Mechanic until he took exception to the curriculum. As the story goes, part of the instruction was to know how a battery worked. In typical Warren fashion, he said, "I don't need to know how it works; either it does or it doesn't, and if it doesn't, I'll change it - I'm not fixing it." He promptly left school proclaiming that it was ridiculous. Not one to abide the ridiculous in anything, he then built his own automotive business from the ground up and was well known as an honest and fair businessman. Warren believed in his employees, mentored several, and was proud to see some of them open their own businesses. Warren was a good man; kind and compassionate. He opened his home to friends in need until they could get back on their feet. He could not pass a stray animal without making sure it was OK and trying to help - even taking some home. Warren faithfully donated to St. Jude's saying, "every kid deserves a chance". This was a belief that Warren lived by - that all living beings deserved a chance. Warren had a love of billiards and ran many local pool tournaments throughout the years. He made many long-lasting friendships along the way. Warren loved his family tremendously. He spent 32 years with his wife Tammy. He had 2 daughters and 8 grandchildren and his favorite name was Pepaw. He kept close to his parents drawing on their strength and love, and kept an ear to the ground for his sisters and their children also. Let us be thankful that our cherished memories will be forever in our hearts and minds. We hope it gives you comfort to know he did not pass from this world alone and, coincidentally, there was a 4.5 earthquake just seconds afterwards. We will let you draw your own conclusions. Warren is preceded in death by his father - Luckey J Walton Jr; sister - Teresa Ann Kersey; and grandchild - CJ Wesley Cross (his namesake). He leaves behind his mother - Patricia Ann Walton; his wife - Mary Tammy Vessels Walton; daughter - Crystal Lynn Cross and husband Michael Ray Cross with grandchildren - Elizabeth Alexandria, Serenity Rain, Shawn Michael, Dakota Bryan, and Sierra Renae; and daughter - Teara Deanne Firor and husband Joshua Nicoli Firor with grandchildren - Addyline Skye, Kennedy Elizabeth, and Norah Anne. Also, sister Vickey A. Walton Roth and husband Peter Roth with nephew and niece - Wyatt Christopher and Alexandra Devyn. His brother-in-law - Wesley Michael Kersey and nieces Jennifer Emily Mathews and Lyndsey Ann Roe with their children as well. Memorial Service will be 2:00 P.M., Saturday, February 19, 2022 at Moore's Southlawn Chapel, 9350 E. 51st, Tulsa, OK. Moore's Southlawn 918-663-2233

Warren Wesley Walton passed from this life at the age of 57 on January 31, 2022. He was born in New Brunswick, NJ on August 29, 1964 to Luckey J Walton Jr. and Patricia Ann Walton. He lived in East Brunswick, NJ with his 2 sisters, Teresa and... View Obituary & Service Information

The family of Warren W. Walton created this Life Tributes page to make it easy to share your memories.

Warren Wesley Walton passed from this life at the age of 57 on...

Send flowers to the Walton family.