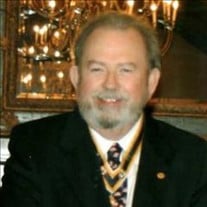 Bill Gaddis was born in Maryville, MO on September 13, 1948 to William G. Gaddis and Opal Churchill Gaddis of Braddyville, IA. Bill lived in Braddyville until his father retired from his oil and gas business in 1961. At that time the family moved to Afton, OK where they operated the Rogers Motel and where Bill graduated from Afton High School. In 1966, Bill went to the University of Oklahoma. He was named the first recipient of the George Lynn Cross Scholarship and pledged Pi Kappa Alpha fraternity. After earning a double major in political science and history, Bill attended the OU School of Law, graduating with honors in 1973. While at OU, Bill met the love of his life, Karen Andrako, and they were married on May 29, 1969. Of that marriage, two children were born, Blaine Harlin Gaddis and Clayton Tyler Gaddis. Bill was exceptionally proud that both boys graduated from the University of Oklahoma, Blaine achieving a Doctorate in industrial Organizational Psychology and Clayton his Juris Doctorate from the OU School of Law. While at OU, Bill was commissioned as a 2nd Lieutenant in the US Army. After finishing active duty at Fort Benjamin Harrison, Bill and Karen moved to Tulsa to begin their careers. As an army officer, both on active duty and in the reserves, Bill attained the rank of Major, finishing his service with the 486th Civil Affairs Company in Tulsa before being forced to lay aside that portion of his life after suffering a major stroke in 1981. Bill was a proud alumnus of the University of Oklahoma. He served terms as the President of both the OU Club of Tulsa and the OU Alumni Association, along with terms as a member of the OU Athletics Council and the OU Alumni Advisory Council. He was very proud he was a member of the first class of OU alumni to receive the OU Regents Award. Bill was also active with the Boy Scouts of America and received his 25-year service award after serving as Cub Master of Pack 45, Assistant Scout Master of Troop 20 chartered through Boston Avenue Methodist Church, as well as Committee Chairman and Chartered Organization Representative for that Troop. He was active with youth sports and coached both of his boys' youth baseball teams throughout their childhoods. Bill was a member of the Sons of the American Revolution and served as President of both the Tulsa Chapter and of the Oklahoma State Society. In 1982, his family joined Boston Avenue Methodist Church where he served on the Administrative Board and as Chairman of the Boy Scout Committee. He also served as an usher for the church and was a greeter at the north door of the sanctuary for over 35 years. Bill was an active Rotarian and served as a member of a variety of service and support organizations over the years. He and his family were recognized as the Tulsa Family and Children's Services Family of the Year in 1995. In 1975, Bill joined the law firm of Whitebook, Knox, Holtz and Harlin which eventually became Whitebook and Gaddis as it exists today. Bill was a member of the American Bar Association, the Oklahoma Bar Association, the Tulsa County Bar Association, was admitted to all the federal bars in the State of Oklahoma and was admitted to practice before the US Supreme Court. He spent over 35 years as a municipal attorney representing several towns in Northeast Oklahoma and as a Municipal Judge. Over the years, Bill served as chairman and member of several Bar Association committees. But of all his accomplishments, Bill was proudest of those he was only indirectly responsible for: his grandchildren and his most cherished title of Papaw, his grandchildren being Olivia, Connor and Benjamin of Blaine and his wife, Michelle, and Waylon, Strummer and Ella of Clayton and his wife, Nicole. Memorial service will be 2:00 P.M., Friday, July 9, 2021 at Boston Ave. United Methodist Church-Sanctuary, Tulsa, OK. Moore's Southlawn 918-663-2233 share memories at www.moorefuneral.com

Bill Gaddis was born in Maryville, MO on September 13, 1948 to William G. Gaddis and Opal Churchill Gaddis of Braddyville, IA. Bill lived in Braddyville until his father retired from his oil and gas business in 1961. At that time the family... View Obituary & Service Information

The family of William Elroy Gaddis created this Life Tributes page to make it easy to share your memories.

Send flowers to the Gaddis family.