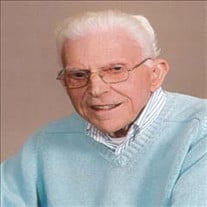 William E. Goodsene, 91, of Elkhart, IN, passed away Sunday, September 19, 2021, at home with his loving wife by his side. He was born on Friday, December 31, 1929, in Elkhart, IN, to Shirley "Bud" and Beulah (Mitchell) Goodsene. He married Elsie Kiefer on October 1, 1971, in Elkhart, IN. She preceded him in death in April, 2000. He remarried Violet Sailor on December 21, 2001. Surviving are: His wife, Violet; 2 sons, William Edward (Teresa) Goodsene of Knightstown, IN, and James Allen Goodsene of Goshen, IN; a sister, Kathryn Jane Cutter of Elkhart, IN; 2 granddaughters, Lindsay Ann (Jon) Arndt of Green Valley, AZ, and Jordyn Kathryn Goodsene (Fiancee, Michael Shoptaugh) of Indianapolis, IN; and great-grandchildren, Clara, Winnie and Leah Arndt, Maelyn and Samuel Shoptaugh. Also surviving, are 4 stepchildren, Margo Sailor of FL, Eric (Kathy) Sailor of Ft. Wayne, IN, Michael (Bonnie L.) Sailor of Elkhart, IN, Mitchell (Bonnie J.) Sailor of Elkhart; 9 step-grandchildren; and 7 step-great-grandchildren. Bill graduated from Elkart High School in 1948, where he was a Miles Laboratories Scholarship winner, and he attended the University of Arizona for several years. He began his banking career with First National Bank as a messenger while still in high school, in 1947, and returned in 1952, as a full-time employee. He held various positions in the bank; including, Assistant Manager of the Bookkeeping Dept., Auditor Manager of Data Processing, and Controller and Manager of the Accounting Division. He also served as Secretary for the Board of Directors and Executive Committee for 25 years, during his tenure at the bank, retiring in 1990. He was past Treasurer of Elcona Country Club and enjoyed curling at the club. He was also, past President of the Elkhart Breakfast Exchange Club, and past Treasurer of the Elkhart Vintage Auto Club. He was a member of Trinity on Jackson, formerly known as Trinity United Methodist Church, and served as a past head usher, President of the Board of Trustees, and a member of various committees. During his retirement, he enjoyed gardening, collecting old cars and having them restored, plus, attending various car shows and swap meets. He also enjoyed spending the winter months in Arizona. Memorials may be given to Trinity on Jackson Church Foundation, or the Parkinson's Foundation. Visitation will be 10 a.m. to 12 noon, Thursday, September 23, 2021, at Trinity on Jackson, 2715 E. Jackson Blvd., Elkhart, IN 46516, where Funeral Services will be at 12 noon, under the direction of Stemm-Lawson-Peterson Funeral Home, 1531 Cobblestone Blvd., Elkhart, IN 46514 (574) 293-6411 Online condolences may be made at: www.stemmlawsonpeterson.com Burial will be 11:45 a.m. (was 1 p.m.), Saturday, September 25, 2021 in the Abbey Mausoleum, Goodsene Private Room #1, Rose Hill Memorial Park Cemetery, 4161 E. Admiral Pl., Tulsa, OK 74115, under the direction of Moore's Eastlawn Chapel, 1903 S. Memorial Dr., Tulsa, OK 74112 (918) 622-1155.

William E. Goodsene, 91, of Elkhart, IN, passed away Sunday, September 19, 2021, at home with his loving wife by his side. He was born on Friday, December 31, 1929, in Elkhart, IN, to Shirley "Bud" and Beulah (Mitchell) Goodsene. He married... View Obituary & Service Information

The family of William Eldon Goodsene created this Life Tributes page to make it easy to share your memories.

Send flowers to the Goodsene family.