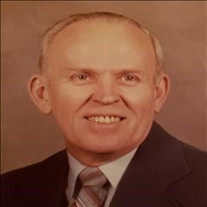 William Lyman Kimmel was born to Walter and Marjorie (Duncan) Kimmel in Tulsa, Oklahoma on August 29th, 1926 and passed away in the early hours of May 29th, 2022 at the age of 95. He was the second of 6 children and grew up in Tulsa graduating from Rogers High School in the class of 1944. When the U.S. entered World War II, Bill left Rogers High School early, joined the navy and was sent to college. He graduated with degrees in Naval Science and Mechanical Engineering. He met the center of his life, Louise Granger, on the porch of his parent's house. He immediately suggested they go out and thus began a 67-year journey of love and devotion. Bill rarely spent an idle moment during his life. He worked long hours at Rainey Corp. designing heat exchangers and still found time to be a Troop 76 scout master for his sons. His hobbies included men's fast pitch softball as a pitcher for several company teams and he and Louise volunteered tirelessly for the Republican Party when Republicans were in a definite minority in Oklahoma. He was an important part of many Tulsa mayoral elections, including Jim Inhofe's campaign where he wrote a program to forecast election results that he used in the service of the party for many years. Louise and Bill had always enjoyed the game of bridge, and after he retired, he had the time to become a Life Master with Louise as his constant partner. Bill also began singing Barbershop music with the Tulsa Founder's Chorus and he and Louise began enjoying the cruising life and finally settled in Sun City West. Bill continued his involvement with Barbershop music in Sun City West and when he and Louise returned to Tulsa, Bill rejoined the Founder's Chorus. Bill Kimmel is survived by 3 sisters, Janice Scudder, Doris Matthews and Nancy Martin; 4 sons, Stephen (Georgia), Ed (Peggy Clark), Regan, and Drew (Pat); 10 grandchildren, Robert Kimmel (Andrea), Kalyn Kimmel, Ariel Kimmel (Nathan Berliner), Billy Kimmel, Olivia Kimmel, Sean Kimmel, Amy Kimmel, Elise Krier (Adam Krier), David Kimmel (Reba), Joseph Kimmel (Taylor) and 7 great-grandchildren, Chiara Kimmel, Cody Kimmel, Miles Krier, Malcolm Krier, Elias Kimmel, Aria Kimmel and Eleanor Kimmel. He is predeceased by his parents; his wife, Louise, brother, Duncan, sister, June Chittom and great-grandson, Malachi Krier. The family would like to thank Hazel Mirzaian for her years of devoted care to Bill. Bill had a temper but was quick to forgive. He was generous with his time and money and was always willing to help those close to him in times of need. He will be missed, and his passing has left a large hole in our hearts. Visitation will be 4-6 PM, Friday, June 3, 2022 at Moore's Southlawn, 9350 E. 51st, Tulsa, OK. Funeral Service will be 1:00 P.M., Saturday, June 4, 2022 at Moore's Southlawn Chapel. Moore's Southlawn 918-663-2233 share memories at www.moorefuneral.com

William Lyman Kimmel was born to Walter and Marjorie (Duncan) Kimmel in Tulsa, Oklahoma on August 29th, 1926 and passed away in the early hours of May 29th, 2022 at the age of 95. He was the second of 6 children and grew up in Tulsa graduating... View Obituary & Service Information

The family of William Lyman Kimmel created this Life Tributes page to make it easy to share your memories.

William Lyman Kimmel was born to Walter and Marjorie (Duncan)...

Send flowers to the Kimmel family.