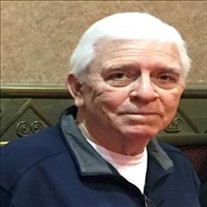 William "Bill" Reed Niceley, Sr., 74, left this life and entered Heaven's gates November 9, 2021. Bill was born March 11, 1947 to George William Niceley, Sr. and Mary Jane (Ballard) Niceley in Tulsa, Oklahoma. He graduated from Nathan Hale High School in 1965. Bill served in the National Guard before marrying the love of his life, Carolyn Sue (Geier) Niceley on March 30, 1973. He worked as a sales representative in the transportation industry for over 30 years before retiring in 2008. Bill loved his grandchildren, never missing an event, and making friends along the way. He loved his family and fishing. He will be missed by all those whose lives he touched over the years while attending and coaching his kids' and grandkids' activities. Bill was preceded in death by his wife, Carolyn Niceley; parents, George and Jane Niceley; brother, Tom Niceley; and brother, George Niceley, Jr.. He is survived by his son Bill and wife Ashley, daughter Brooke Thompson and husband Matt, and five grandchildren, Kenzie and Peyton Niceley, and Madison, Taylor, and Wyatt Thompson. Memorial Service will be 10:00 A.M., Monday, November 15, 2021 at Moore's Southlawn Chapel, 9350 E. 51st, Tulsa, OK. Moore's Southlawn 918-663-2233

The family of William Reed Niceley, Sr. created this Life Tributes page to make it easy to share your memories.

Send flowers to the Niceley family.