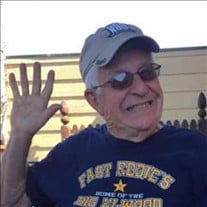 William Schell Abernethy, 83, of Owasso, OK, passed away on May 23rd, 2022. Bill was born on March 7, 1939 to Charles and Mignon Abernethy in Chicago, IL. In 1958 he proudly graduated as a member of the first class of Edison High School in Tulsa, OK. He served in both the Army and the Air Force Reserves. In 1961, he met Evelyn Stephenson, and they wed that same year. They had two children, William "Craig" Abernethy and Michelle Lynn Wilkerson. His family meant more to Bill than anything else. He was unendingly proud of his 3 grandchildren: Casey, Taylor, and Trevor. Bill worked in the water treatment industry and was the owner of Sunset Chemical. He built the company from the ground up and was proud of his accomplishments. He was an exceptional salesman. Bill was a force of nature, and he loved entertaining at the family home on Lake Ft. Gibson. You could often find him manning the grill and entertaining the crowd with stories that were far-fetched but somehow true. He was passionate about the outdoors and nature. He loved to cruise around on the boat, work in the yard, and visit with friends and neighbors. Those lucky enough to know "Wild Bill" can tell stories about his keen sense of humor and his warm, welcoming smile. He is preceded in death by his parents Charles and Mignon, and his wife of 51 years, Evelyn. He is survived by his brother Richard Abernethy and his wife Linda. Also his son Craig Abernethy, his daughter-in-law Lesa, and their daughter Casey. Also, Michelle Wilkerson and her children Taylor and Trevor. Bill leaves of a legacy of family and friendship that will be missed by those who knew him. After battling dementia for many years he is now reunited with Evelyn which is no doubt where he always wanted to be. Visitation will be from Noon to 2:00PM Tuesday, May 31st, 2022, funeral services will be held 2:00PM, Tuesday, May 31st, 2022 both at Moore's Southlawn Chapel, 9350 East 51st Street, Tulsa, Oklahoma. Military Burial Service immediately following. Moore's Southlawn 918-663-2233

William Schell Abernethy, 83, of Owasso, OK, passed away on May 23rd, 2022. Bill was born on March 7, 1939 to Charles and Mignon Abernethy in Chicago, IL. In 1958 he proudly graduated as a member of the first class of Edison High School in... View Obituary & Service Information

The family of William S. Abernethy created this Life Tributes page to make it easy to share your memories.

William Schell Abernethy, 83, of Owasso, OK, passed away on May...

Send flowers to the Abernethy family.