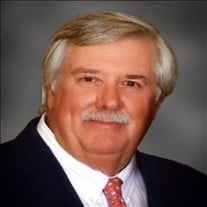 Mike Hill, beloved husband, father, grandfather, brother, uncle, and friend passed away on March 24, 2022. His sudden passing is a reminder that tomorrow is never promised. Mike was born on July 14, 1947 in Norman, OK to Windham and Bette Hill. He moved to Tulsa at a young age, and he attended Will Rogers High School. After graduation from high school, he attended Baylor University where he was a member of Beta Tau Alpha. Mike was an avid Baylor fan, and he attended multiple games, including several bowl games and the 2021 National Championship basketball game. While at Baylor, he met his wife of 48 years, Sally McGill. Together they built a life full of love, fun, adventure, and family. After graduation from Baylor, he was drafted and served in the US Army, stationed in Germany. Upon discharge, he attended law school at the University of Tulsa. He was a member of the Tulsa County and Oklahoma Bar Association. He also had the great honor of being admitted to practice before the Supreme Court of the United States. In 1984, he was co-founder of the law firm Secrest & Hill where he worked until his passing. He was a long time member of Asbury Church where he served on the Foundation Board. He was also a member of the Faithbuilders Sunday School class where he served as a teacher. Although Mike was dedicated to his work, his greatest joy was spending time with his friends and family. Whether it was after-church lunches with the class, traveling the world with family and friends, or his annual trip to the Indy 500, Mike was always up for an adventure. Wherever he went, he was always in a hurry to get there and in an even bigger hurry to leave. An avid reader and music-lover, he enjoyed discussing books and music with others, and his signed leather book and vinyl record collections were quite impressive. Mike is survived by his wife, Sally; son, Eric Hill and his wife, Kelli; daughter Jayme Wilson and her husband, Jonathan; grandchildren Noah, Gabe, Leah Claire, and Creek; brother, John Hill and his wife, Linda; along with several nieces and nephews. A Celebration of Life service will be held Saturday, April 2, 2022 at 10 am at Asbury Church in Tulsa, OK. In lieu of flowers, donations can be made to Asbury Church in memory of Mike Hill. The address is 6767 S Mingo Rd, Tulsa, OK 74133, and the website is https://asburytulsa.org/ Moore Funeral Home - Southlawn Chapel 918-663-2233

Mike Hill, beloved husband, father, grandfather, brother, uncle, and friend passed away on March 24, 2022. His sudden passing is a reminder that tomorrow is never promised. Mike was born on July 14, 1947 in Norman, OK to Windham and Bette Hill.... View Obituary & Service Information

The family of Michael Hill created this Life Tributes page to make it easy to share your memories.

Send flowers to the Hill family.