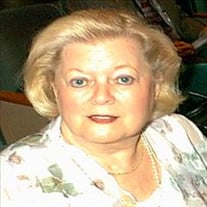 Ruscel Dean Holtzapple went home to be with her Lord and Savior on Sunday, March 13, 2022. She will be greatly missed and was loved by many. Ruscel was born January 25, 1934, in South Bend, Indiana, to Geraldine Edwards and Russell James Lewis. Early in Ruscel's life her mother married Donald L. Dickey-a very kind stepfather to Ruscel-and within time, Ruscel was joined by stepsiblings, Doyle (m. Barbara), Donna (m. Gabe Szoke) and Deborah. On March 10, 1953, after their high school graduations, Ruscel married her sweetheart Robert E. Holtzapple before his deployment to the Army during the Korean War. Following his discharge, they were blessed in the births of daughter, Diane (m. Steven Hefta) and son, Robert. She was grandmother to Erin (Hefta) Ross (m. Dave), Erik Hefta (m. Katelyn Lawler) and Emily (Hefta) Brown (m. Matthew) and great-grandmother to: Charlotte, Margaret, Blakeley and Peyton. Ruscel's joy was her family and she was a loving wife, mother, grandmother and homemaker. With a gentle, gracious spirit she often walked alongside friends and strangers, encouraging them through their life journeys. Many years earlier, her hobbies included singing with a Tulsa community choral group, tole painting and embroidery/cross-stitching. She was a person of faith and associated with the Christian and United Methodist churches where she loved singing the old hymns. This carried into her family life, where she would often be found playing the hymns at her piano. Her desire to grow in understanding and to live a life that blessed God included participation in Bible Study Fellowship for many consecutive years. Ruscel was preceded in death by her mother, father and stepfather (Geraldine, Russell and Donald), her stepbrother (Doyle), stepsisters (Donna and Deborah) and her husband (Robert). A celebration of life service will be 2:00 P.M., Friday, March 18, 2022 at Moore's Southlawn Chapel, 9350 E. 51st, Tulsa, OK. The service will be live streamed via a link that will be available just prior to the service on Ruscel's tribute wall. Moore's Southlawn 918-663-2233

Ruscel Dean Holtzapple went home to be with her Lord and Savior on Sunday, March 13, 2022. She will be greatly missed and was loved by many. Ruscel was born January 25, 1934, in South Bend, Indiana, to Geraldine Edwards and Russell James... View Obituary & Service Information

The family of Ruscel Dean Holtzapple created this Life Tributes page to make it easy to share your memories.

Ruscel Dean Holtzapple went home to be with her Lord and Savior...

Send flowers to the Holtzapple family.